The bus that belonged to Meghana Travels caught fire at Masaipet of Hanumanthuni Padu Mandal of the district at around 2.30 am.

ONGOLE: Passengers sleeping on a long-distance bus from Kadapa to Vijayawada in Andhra Pradesh were hurriedly roused out of sleep at 2.30 am by the driver right after he smelt smoke in the cabin. Moments after the travelers jumped out of the bus, flames engulfed the vehicle.

There were 44 passengers on the bus apart from the two drivers. The incident happened at Masaipet in Hanumnathunipadu mandal in Prakasam district of Andhra Pradesh.

No one was hurt in the fire but the bus was burnt down to its skeleton by dawn. 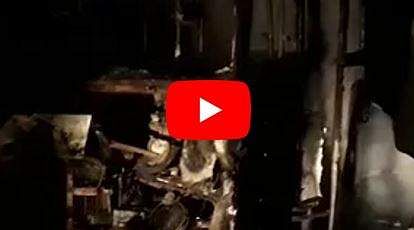 There were two drivers on the bus, Chennaiah and S Keshava, the latter at the wheel. The bus was rumbling down a ghat section when Chennai sniffed smoke in the cabin.

"I noticed that the smoke was seeping up into the driver’s cabin from underneath and alerted Keshava. We decided not to take chances and woke up the passengers and rushed them down. Soon smoke filled the bus and then the flames broke out,"" Chennaiah said.

Police and fire tenders were called on the emergency number 100 but the fire devoured the bus before it could be doused.

Chennaiah said the engine of the bus must have overheated when it was climbing up the incline.

The management of Meghana Travels, based in Guntur, called in taxis from the nearby town of Giddaluru and sent the passengers to their destination, Vijayawada.

The incident comes less than 24 hours after a CNG bus was gutted reportedly due to a technical issue in the engine, at Siddhartha Medical College, near NTR University in Vijayawada on Tuesday morning. There were no casualties in yesterday's incident too.