The excavations that have been going on for the last 10 days at the 16th century Chennampalli Fort in Tuggali mandal of Kurnool district have grabbed headlines.

KURNOOL: The excavations that have been going on for the last 10 days at the 16th century Chennampalli Fort in Tuggali mandal of Kurnool district have grabbed headlines. If the State government is to be believed, digging is being carried out to find minerals. But what minerals? No one has any idea, it seems. Contrary to the government's claims, investigation at ground zero by Express revealed that a group of ‘five experts’ was behind the ‘excavations’ at the fort for hidden treasure.

According to reliable sources who are in the know of the motives behind the so called experts’ interest in Chennampalli Fort, permission for excavating the place under the guise of mineral prospecting was obtained by the group from  government with the help of two officials, who are reported to be close to a minister holding an important portfolio. Sources said that the five ‘experts’ — a mining businessman, a retired police officer, a government servant and two experts in the digging of hidden treasures —  are part of the group which is reportedly on a treasure hunt. 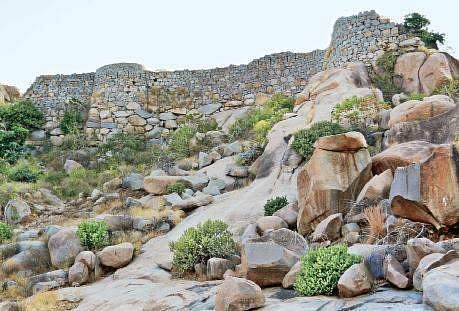 In the face of increasing resistance from villagers to their dubious activities at the fort and its peripherals, the group has reportedly decided to involve officials to lend legitimacy to the digging. Though there was no prior survey by any geologist to identify what sort of minerals were there beneath the fort and nearby area, the excavations commenced on December 13.

With reports emerging about digging at the fort for some ‘treasure’, officials had hurriedly organised a press conference to clarify that it was for minerals and not for any treasure. In fact, district collector S Satyanarayana said that villagers wanted an end to the ongoing unofficial excavation at the fort and requested the state government to step in directly to scotch rumours about the treasure hunt.

“However, the main purpose of taking up excavation activity is for mineral prospecting. If any treasure was to be found at the site, the same would be kept in the custody of the Collector as per the provisions of the Indian Treasure Trove Act,” he explained. Mines and Geology department assistant director T Natarajan said when some people sought permission to mine the area for minerals, it was rejected. “The department itself has taken up mineral prospecting and exploration activity in the vicinity of the fort as the site belongs to the government as per directions of the higher authorities,” he clarified. However, questions are being raised as to why the normal procedure was not followed for mineral prospecting and exploration and mystery on what type of minerals are being explored at the place deepens.

“If it was for mineral prospecting, why were the villagers offered 33 percent of any treasure found in the excavation,” questioned an elder from Chennampalli village, not wishing to be named. It only substantiates reports that purpose of excavations was not mineral prospecting. According to villagers, a grama sabha was organised by the officials, who offered them 33 percent of the value of treasure found at the fort, so they gave their consent reluctantly. Some villagers said that gram sabha was held only after the objections were raised by the villagers over the excavations.

Workers engaged in the excavations are being paid Rs 700 each per day and even the earth movers are being employed. “Pay is good so we agreed to dig,” said a worker and reasoned that as they are facing tough days due to drought conditions in the district. So, any work is  better for them. In the last 10 days since the excavation works have commenced, only some bones of either a horse or a donkey, a tusk of an elephant, big-sized red brick and hard black soil were found. But rumours started circulating that a treasure trove containing gold coins and a big urn were found, which officials denied. On Friday, during excavation, the diggers hit a hard rock. They started drilling it and it continued even on Saturday. Officials engaged there tried to find out the depth of the stone using equipment, but could not assess the exact depth. They decided to employ heavy drilling machinery in next couple of days.
Meanwhile, the exploration for ‘minerals’ at the fort was being opposed by the heritage lovers and some people in the nearby villages. India National Trust for Art, Culture and Heritage (INTACH) district convener B Venkateswarlu strongly opposed the digging and said it would damage the centuries-old fort. “Till today, there has been no clarity as to the exact purpose of the excavations.”

He said they will take up an agitation if any damage was done to the fort. “It is the duty of everyone to protect the heritage of the district,” he said. The sentiment was echoed by several villagers. Meanwhile, the department of culture seems least concerned about the possible damage to the fort. “It is not a listed protected monument,” was the reply from Minister for Tourism and Culture, Bhuma Akhila Priya, who incidentally hails from the district.

Assistant director of Archeology Survey of India (ASI) K Krishna Chaitanya said that the fort is not under ASI list. They only take up any excavation or protective measure on the directions of their Director General at Delhi, when there is a request from the State Government. State archeology department assistant director G Gangadhar maintained that Chennampalli Fort is not on their department list. “But we visited the site to take note of the items that were found during excavations. If the bones, tusks and others things excavated so far were identified as having any archaeological and historical importance, we would collect them and shift them to archeology museum,” he said.

District superintendent of police Gopinath Jatti said police personnel are present there only to provide security and they have nothing to do with any excavation. He clarified that security for the excavations at the fort was provided as per the request of the district collector.
Meanwhile, Public Accounts Committee Chairman Buggana Rajendranath Reddy took objection to the absence of officials from either ASI or state archeology department at the site, which could lead to irreparable damage to the fort. He demanded an inquiry into the matter.

Treasure or bones?
In  the last 10  days since the excavation works have commenced, at the fort only some bones of either a horse or a donkey, a tusk of an elephant,   big-sized red brick and hard black soil were found. But rumours floated that a treasure trove of gold coins and a big urn were found

Now we are on Telegram too. Follow us for updates
TAGS
Chennampalli Fort Kurnool district hidden treasure