As many as 14 vehicles seized for charging more than regular fare.

VISAKHAPATNAM: Cracking the whip against private bus operators, who have been fleecing passengers by cashing in on the demand during this festive season, the Road Transport Authority (RTA) seized 14 private buses here on Friday. 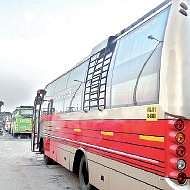 The team led by Motor Vehicle Inspector Mohammed Khan intercepted private buses coming from Hyderabad, Chennai, Benguluru and Vijayawada at Kurmannapalem. Khan said that they had raided 29 buses belonging to various private travels. They booked cases against 15 buses, while the remaining 14 buses have been seized apart from slapping cases.

“We have taken proofs from the passengers who had paid the fare. While some buses have increased by 30 percent, some others charged double the normal fare. We have booked cases against buses which increased fares by around 30 percent, but if the fares are increased by more than 50 percent, we also seized the buses,” he said.

Sources said that buses from Hyderabad to Vizag are charging almost double the normal fares. Some passengers even paid around Rs 3,000, while the normal fare of AC seater is not more than `1,100. Meanwhile, the situation remains unchanged  with buses plying to Chennai, Vijayawada and Benguluru from Vizag.

District transport commissioner S Venkateswara Rao appealed to people to inform them if the private buses  charge more than the normal fare.