Congress senior leader and Rajya Sabha member KVP Ramachandra Rao called upon Telugus across the globe to tweet their demand for Special Category Status (SCS). In an open letter to Telugus on Wednesda

VIJAYAWADA: Congress senior leader and Rajya Sabha member KVP Ramachandra Rao called upon Telugus across the globe to tweet their demand for Special Category Status (SCS). In an open letter to Telugus on Wednesday, Rao said he felt it was his duty to appeal to the Telugus to begin a mission to tweet the demand for Special Category Status for the State and protest against Prime Minister Narendra Modi’s inordinate delay in fulfilling the promises made in Parliament to Andhra Pradesh. 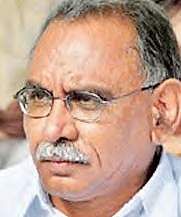 On behalf of the Congress party, he urged Telugus across the world to use the nation’s 68th Republic Day as the launch pad to take to twitter and turn the 140-character limit into a virtual weapon to force the Centre to realise the legitimate demands of the State. He said the tweets need to be accompanied with hashtags #WeDemandSpecialCagetoryStatusForAP, #CompletionOfPolavaram- Project, #SpecialPackageForBackwardRe gions, #FundForCapitalCity, #DistributionOfAssetsAsPerSchedule9&10, #FullfillingRevenueDeficit, #Vizag- ChennaiIndustrialCorridor, #RailwayZoneAtVizag, #PortAt- D u g a r a j a p a t n a m , #SteelPlantAtYSRKadapaDist. He also wanted the twitter handle of Prime Minister, Finance Minister and AP Chief Minister, which are @narendramodi, @ PMOUnion, @arunjaitely, @ MVenkaiahNaidu and @ncbn, to be used in the tweets, so as to address the issue to the person concerned. He said at least one of them should be tagged along with the hashtag with a sentence of protest.