A diamond businessman from Vijayawada died in a boat mishap in the river Arkansas on the outskirts of New York, US, on Monday.

VIJAYAWADA : A diamond businessman from Vijayawada died in a boat mishap in the river Arkansas on the outskirts of New York, US, on Monday. The deceased has been identified as A Dinesh (27),  nephew of Kanigiri MLA K Babu Rao.

The accident occurred when Dinesh, his wife and some other relatives were conducting a boat ride in the early hours of Monday. On an invitation from a close relative, Dinesh with his wife Pranusha went to the US on April 13 to celebrate their first marriage anniversary which was on April 21. 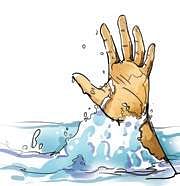 Dinesh had already booked his tickets to return to India on April 30. As a part of US tour, the couple had visited the house of Yasaswini, the Kanigiri MLA’s daughter.

As there was some time left for their flight, they planned to go for a boat ride in river Arkansas and arranged a private boat for the same. Dinesh, his wife Pranusha, Yasaswini and her son Bhuvanesh were travelling in the boat when it  capsized after hitting ice blocks.

Terrorism wiped out from Kashmir, now it's turn of Naxalism: Yogi Adityanath in Bihar

China asks US to walk with it instead of continuing provocations