New rules on cattle sales limit the options for farmers who have been backed to the wall by recurrent droughts in Andhra.

VIJAYAWADA:  The new restrictions on sale of cattle to slaughterhouses has come like a bolt from the blue for farmers in Andhra Pradesh, particularly in perennially drought-hit Rayalaseema where scarcity of fodder is a universal problem.

One farmer, K Venkatasivarami Reddy in Lakkireddypalle in Kadpa district, said, “The Centre should immediately withdraw the order. The new rules restrict the sale of cattle to slaughterhouses but do not say how farmers can sell their unproductive cattle. I have five milch animals. But their milk yield has come down. I have to sell them and buy new ones. Who will buy them now?”

The drought this year has been particularly acute in Rayalaseema where it is normal for farmers to sell their aged cattle. They do not care who is buying them as long as the price is right. The traders are mostly from Karnataka, Kerala and Mumbai. 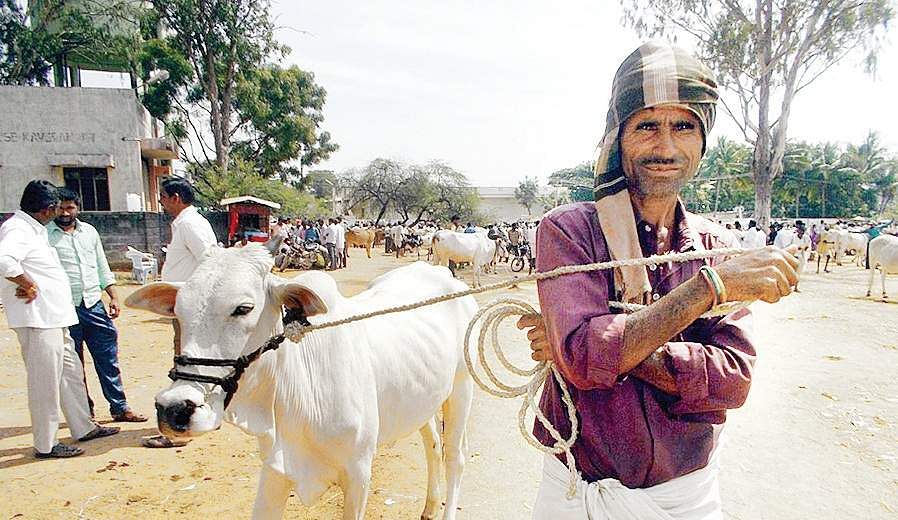 Vishwa Hindu Parishad (VHP) activists say unproductive cattle need not be sold. In fact, farmers could sell the urine and dung to those who make fertilisers and use the proceeds to buy feed for the cattle.

Asks a senior VHP leader Kandula Srinivasul Reddy: “Cattle should not become a burden when they get old. Such cattle are like our parents. Would we forsake them just because they are of no use to us?”

In the perennially drought-hit district of Anantapur, the situation of farmers is desperate. In towns like Gorantla, Kadiri, Pamidi and Gutti, about 15,000 heads of cattle on an average are sold every week. They include healthy and young cattle too but by and large farmers don’t care what becomes of the cattle they sell.

C Chandrasekhar Reddy, a farmer from Miduturu in Peddvaduguru mandal, said, “We have had a drought for eight years. We would have raised sorghum or groundnut had there been rain. The crops would have yielded a lot of fodder. But there have been no rains. We have no food for ourselves. Where would we get fodder for animals?”

Beef is sold — without express permission — in Anantapur, Hidupur, Kadiri and Guntakal town but no one knows how this business will be affected. And now that the Centre has officially banned public sale of cattle for slaughter, officials have decided not to entertain any pleas for permissions.  “We will not give any permissions in future,” said S Gangadhar Reddy, health inspector of the Anantapur Municipal Corporation.

“Usually in winter and in summer, sale of cattle takes place very briskly. This is on account of the lack of fodder and demand for beef due to Bakrid and Christmas. Traders from places like Hyderabad, Bangalore, Chennai, Kochi and Tiruvananthapuram come here,” said Anantapur market yard superintendent K Harinath Reddy.

When it comes to Chittoor district in Rayalaseema, daily milk production is of the order of 2.23 lakh litres, the highest in India. This is an indication of the volume of trade in cattle that takes place in Pileru, Madanapalli, Kuppam and Punganur mandals. Offiilas say that not less than one lakh animals are purchased yearly at these markets.

If drought is acute, the number will go up to two lakh. To administer the rules banning sale of cattle to slaughter, the Animal Husbandry Deptt would have a tough task as an elaborate procedure has to be followed by understaffed departments. “The GO says all cows have to be photographed before being sold,” an official said. The ban is hitting families supplying cattle for slaughter.

Now we are on Telegram too. Follow us for updates
TAGS
cattle breeding slaughterhouses Andhra Pradesh Restrictions on sale purchase of cattle