22 and counting: TDP plans to lure more MLAs from YSRC

Since Centre has responded positively to the plea to increase number of Assembly seats in State, ruling party hopes to attract more Opposition legislators.

VIJAYAWADA: At a time when YSRC chief and Leader of the Opposition YS Jaganmohan Reddy is embarking on a mega walkathon (padayatra) to cover 3,000 km in a span of six months starting from Monday, the ruling TDP is reportedly planning to lure more MLAs from the opposition party by raising hopes of enhancement of the number of Assembly constituencies by the 2019 elections. 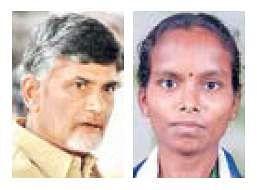 Though the issue of increasing the number of Assembly seats from the present 175 to 225 was promised in the AP State Reorganisation Act, 2014, it went into cold storage following the Centre saying time and again that the number of seats in the Assemblies of Andhra Pradesh and Telangana will not be enhanced till next delimitation in 2026.

Though the Union Home Ministry, which is dealing with resolving the issues pertaining to the AP State Reorganisation Act, at one time hinted at introducing a Bill in Parliament in the budget session earlier this year for enhancing the number of seats by amending Article 170 (3) of the Constitution of India, it was not done.

At one point of time, Telangana Chief Minister K Chandrasekhar Rao, who also believed that the number of Assembly constituencies in his State will be increased from 119 to 153, gave up hopes after his meeting with Prime Minister Narendra Modi and Union Home Minister Rajnath Singh three months ago.

But, all of a sudden, Chief Minister N Chandrababu Naidu, who called on the Union Home Minister recently, once again raised the  issue. Later, he is learnt to have informed the TDP leaders that the Centre gave an assurance to increase the number of constituencies. The next day, when he landed in Vijayawada from Delhi, YSRC MLA from Rampachodavaram Vantala Rajeswari joined the TDP.
The TDP leaders believe that some more MLAs from the opposition party will join the TDP while the YSRC chief going on his walkathon.

“Though many YSR Congress leaders are planning to join the TDP, they are adopting a wait and watch policy as they are not sure about getting seat in the next polls. But, with the Chief Minister indicating that the Centre has responded positively towards enhancing MLA seats, we are sure that more YSRC MLAs
will find their way to the TDP,’’ a TDP leader said, indicating that Naidu dropped the feelers to lure more leaders from the YSRC.

Meanwhile, Congress MP KVP Ramachandra Rao suggested Naidu to concentrate on addressing the issues of public instead of focusing on increasing the number of Assembly seats. 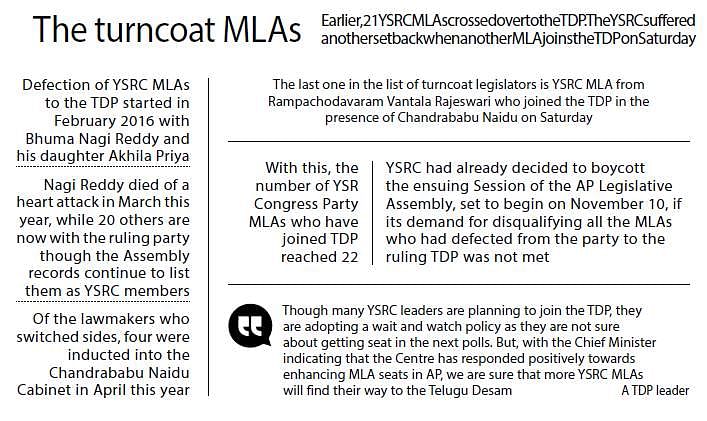