Andhra Pradesh light years away from being a cashless society

A year after demonetisation, the sunrise state of Andhra Pradesh is still a long way from becoming a completely cashless society.

VIJAYAWADA: A year after demonetisation, the sunrise state of Andhra Pradesh is still a long way from becoming a completely cashless society. The big push for digital payments on November 8 has apparently not lasted long. Though the state government encouraged cashless transactions through PoS machines at ration shops, rythu bazars and in the payment of pensions, taxes and other utility services, the number of digital transactions has come down drastically.

Government banks are still supplying PoS machines to traders who have placed applications for the device. In December last, banks in the state received over 38,000 applications from traders. Around 17,380 units have been installed and are in use and over 10,000 are in the process of being set up. Interestingly, a majority of the applications have been withdrawn, but the government is still finding it difficult to meet the demand as banks are running short of the machines. “Now, we get two or three calls a day enquiring about PoS machines. In December last year, we sold at least 20 machines a day. That was an almost ten-fold increase,” said T Srujana, PoS machine dealer with SBI, Vijayawada. 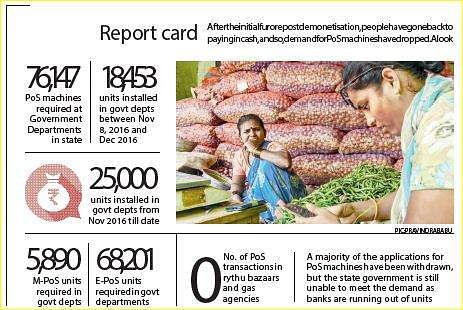 However, few PoS transactions are made there. Durga, a vendor at the rythu bazar in Swaraj Maidan here, said in the initial days of demonetisation others like her had no choice but to adopt PoS machine transactions. She ended up paying `4,000 to APCOB bank for the device and now spends `400 as rental charge every month.