Old buildings to be cleared for road widening

GUNTUR: The Guntur Municipal Corporation (GMC) officials have said that old buildings will be cleared for road widening.It may be mentioned here that a three-storeyed building collapsed on Nandivelugu Road on November 11. On Sunday, the GMC officials noticed another old building and demolished it.

District Collector K Sasidhar constituted a committee comprising GMC SE, Public Health and Municipal Engineering department SE and R&B SE to conduct a thorough inquiry into the collapse of the three-storeyed building. The officials have already inspected the building site and will submit a report within two days.

GMC chief Ch Anuradha said, “As a precautionary step, we are going to identify old buildings that came up on encroached sites and demolish them. Central lighting, drainage and beautification works will also be taken up.” She said that they identified two or three buildings which are in a dilapidated condition on Nandivelugu Road and steps would be taken to demolish them. 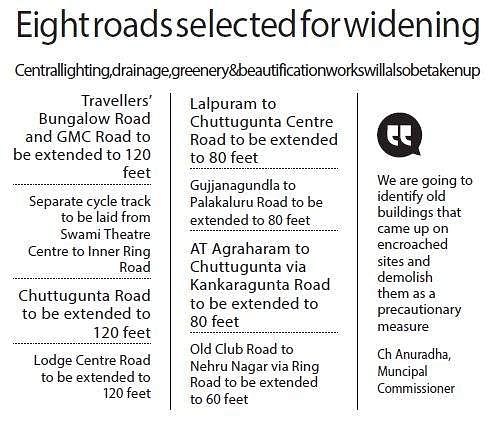