138 depositors have lodged complaints so far claiming they deposited around Rs10.06 crore.

SRIKAKULAM: Police on Thursday arrested Tankala Sreeram, the owner of a local trading company on charges of duping hundreds of depositors by promising them higher rates of interest. Police also arrested four people including government a school teacher who not only helped Sreeram luring the depositors but also were acting as his benamis too.

Tankala Sreeram, after working a for a while in several broking houses in Hyderabad and Vizag, launched his company in Rajam town by taking an individual franchise of a Kerala-based company Indi Trade Capital Limited in 2015 and shifted it to Talada village in Santhakiviti mandal four months ago.
The depositors started approaching police after finding that Sreeram, along with his family members, had fled and his office locked. 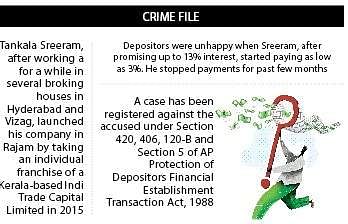 “The police began the investigation based on the complaint lodged by the kin of Dasari Kannam Naidu, a depositor from  Sankaruni Agraharam, who reportedly died of cardiac arrest after the fraud came to light.  Finally, Sreeram and his benamis were nabbed,”  said SP CM Trivikiram Varma, while producing the accused before the media here on Thursday.  The other accused are Vavilapalli Jagadeeswara Rao, a government school teacher from Mandarada, Narayanasetti Chandra Sekhar, a merchant from Santakaviti, Burada Seetaram from Modugulapeta, Gade Ramulu from Mukundapuram and Yedla Janardhana Rao, a resident of Mandarada.

“As many as 138 depositors have lodged complaints at Santakaviti police station so far, claiming that they had deposited around `10.06 crore with the company. Vavilapalli Jagadeesh had made his teacher colleagues invest in the company for which Sreeram offered him `2 crores and registered 14 acres in his name.  The teacher had made 25 teachers and 30 others to deposit money in the company,” the SP said.