Students of Malagapudi Zilla Parishad High School on Friday wrote to district Collector Karthikeya Mishra complaining about the poor quality of midday meals being served to them.

KAKINADA: Students of Malagapudi Zilla Parishad High School on Friday wrote to district Collector Karthikeya Mishra complaining about the poor quality of midday meals being served to them. The children explained that it is not uncommon to see stones and dirt in rice which is, more often than not, undercooked. The eggs provided to them are not cooked properly, or worse rotten. The letter said many students had, as usual, skipped their meals the day the letter was penned.

The issue came to light when alumni of the school had gone to the campus to set up a water tank on its premises. They were shocked to see the quality of the food being served and so urged all 600 students to write to the Collector. Children from seven villages around Mulagapudi attend classes in the school where at least 25 to 30 students go hungry every day due to short supply of meals. As there is no facility for cooking to be done on the campus, meals are brought from elsewhere. 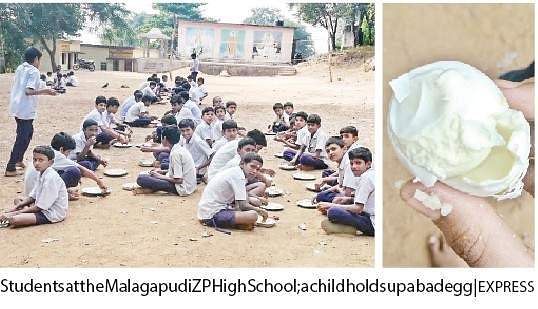 The students allege that they have written to the Department of Education several times, but their problems have not been addressed till date.  “Officials say a healthy diet is necessary for students to be able to do well in school, but they don’t care enough to ensure that we are given good food. We are fed up, it’s high time authorities did something about this,” said a student who signed the letter along with Kavya, Ganesh, Nani and several others.

Students of the high school have been drinking water from the Panchayat borewell outside because there is no drinking water facility on the campus. The toilets too do not have water, making it difficult for all, particularly female students.Collector Kartikeya Mishra visited Karapa Z P School in Kakinada Rural on Thursday and said he would personally ensure that the quality of midday meals is bettered.