Incentives promised to women giving birth in government hospitals as part of schemes to bring down maternal mortality rate are not being paid. The file pertaining to the release of `2.23 cror

ANANTAPUR : Incentives promised to women giving birth in government hospitals as part of schemes to bring down maternal mortality rate are not being paid. The file pertaining to the release of `2.23 crore towards the efforts is still pending for clearance. Various schemes, including Janani Suraksha Yojana (JSY), Janani Sishu Samrakshna Yojana (JSSY) and family planning are being implemented by the State and Central governments through the National Health Mission. If a woman delivers in a government hospital, she is eligible to get benefits under the three schemes. 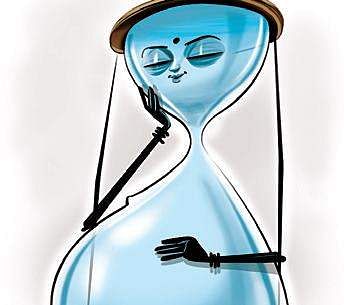 As per the norms, benefits are to be disbursed to the woman at the government hospital itself after the delivery. Across the district, about 72,000 women give birth every year, of them 45.47 per cent deliver in government hospitals. Most of the women are below poverty line (BPL) and eligible to get benefits under the schemes. Pregnant women are paid `1,000 in rural areas and `600 in urban areas under the JSY scheme. If the woman undergoes surgery under the family planning scheme, she is to be paid `600. If she is taken in a vehicle and blood infused, the expenditure should be borne by the government.

Those who undergo caesarean section operation are to be provided nutritious food in hospital. Pregnant women are not being paid the incentives promised to them since October. As much as `1.3 crore is required to disburse incentives under JSC scheme; `8 lakh under JSSK scheme; and `85 lakh under family planning operations. District officials have written to the government for the sanctioning of funds but have not received any reply yet.

As per official statistics, 7,531 women were given `69.7 lakh worth incentives under JSY scheme till the end of July. However, DMH Dr P Venkataramana claimed that there was no dearth of funds under JSY, KSSK and FP schemes. “There are no complaints that incentives are not being given to beneficiaries. Incentives are being disbursed as per guidelines and norms,” he said.