District collector B Lakshmikantham, city joint police commissioner B V Ramana Kumar, Fire and NRDF officials reached the spot and tried to bring the students down.

VIJAYAWADA: Tension prevailed at ESI hospital in Gunadala on Sunday when students of Fathima Institute of Medical Sciences (FIMS) 2015-2016 batch intensified their agitation by threatening to jump from a cell phone tower.

As many as six students climbed the tower around 10 am and raised slogans against the government for failing to render justice to 100 medical students who lost two years in their battle with the college management.

District collector B Lakshmikantham, city joint police commissioner B V Ramana Kumar, Fire and NRDF officials reached the spot and tried to bring the students down.

No sooner did Chief Minister Chandrababu Naidu came to know about the incident than he appointed eight students to participate in a discussion at the Assembly on Monday. He further asked the agitators to call off their protest and said that the State government is doing their best to mete out justice to them.  The Chief minister’s assurance brought the mercury down and after six hours, the students called off their protest.

“We have been fighting with the State government and the Centre to render justice to the 100 students whose careers are hanging in the balance. It’s been more than two years since we started our agitation but the government has failed to relocate us to other colleges,” said FIMS student Shaik Mujeer.
The students further urged the Chief minister to solve the issue immediately and added that with further delay, it is becoming mentally harrowing for them.

FIMS was affiliated to Dr. NTR University of Health Sciences (NTRUHS). They did not have permission from the Medical Council of India (MCI) to admit students during the first and second phases of counselling in 2015-16. Flouting the rules, the college management filled 100 seats during the third phase after the High Court passed interim orders. However, the admissions were later cancelled by the MCI. After their admissions were nullified by the medical body, the students staged various protests in Vijayawada and New Delhi demanding justice.

They asked the government to relocate them in other colleges. The government’s petition for relocation was rejected by the MCI and the Supreme Court dismissed the plea on October 27 as the government was not willing to forego those 100 seats.

Health Minister Kamineni Srinivas said the MCI raised serious objections to relocating the FIMS students in other government colleges and the Supreme Court dismissed the State government’s request. He also said that FIMS management duped the students by making false promises. “The State government is not linked with the FIMS management. The Chief minister has instructed me to go to Delhi and discuss the issue with central government officials to find a permanent solution,” said Srinivas. 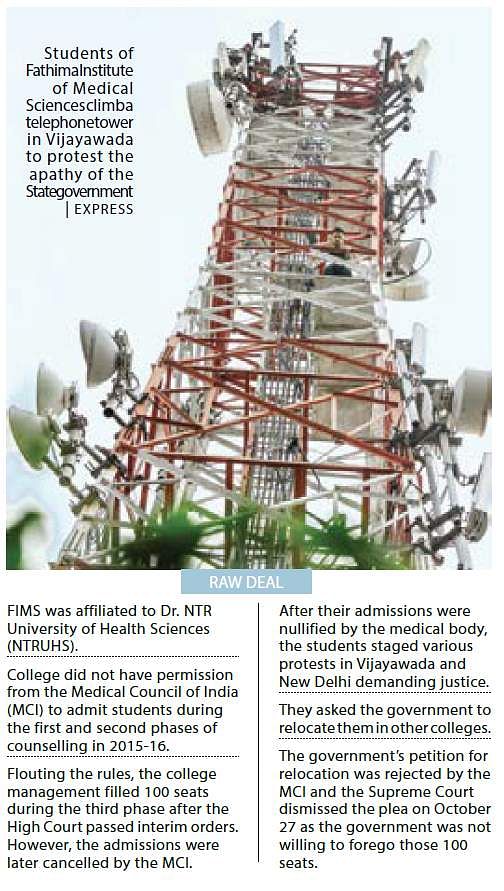