Despite testing positive in kidney screening, many skip second test

Most of the screened patients seem to be reluctant to go for further examinations. 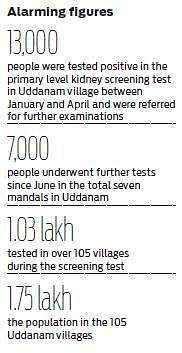 A 30-year-old CKD patient from Sahalalaputtuga of Kaviti mandal said though he tested positive with 2.2 mg/dl, he had not undergone secondary level examinations so far. He also said his creatinine level dropped to 1.2 when he got it tested in a private lab.Moreover, no medication for kidney diseases is available at the government hospitals except calcium and multivitamin tablets, which made him opt out of the second-level testing.

K Ram Babu of Pedda Kojjilirya village said though he was aware of the screening tests conducted over a period of three months in Uddanam villages, he did not undergo the screening as he was scared about the result. He said many Uddnam people had avoided the screening fearing adverse test results.
District coordinator for hospital services Dr Surya Rao said as the primary screening examinations were conducted at their villages, people made use of the service.  However, the secondary level tests were conducted at the hospitals in Sompeta and Palasa, making people skip it.
He said the government was mulling to conduct a drive to make more people to undergo testing from across the Uddanam areas by using the medical staff working in the village levels.

Stay up to date on all the latest Andhra Pradesh news with The New Indian Express App. Download now
TAGS
Uddanam kidney screening