Contractor stops work as bills worth H6.5 crore are pending; laying of road up to 3 km completed, work on remaining 2.1 km is in final stage.

GUNTUR: Failure of the government to clear the contractors’ bills has led to works on the 5.1 km ghat road to the ancient Kondaveedu Fort at Kothapalem village (Puttakota) in Yadlapadu mandal, being stopped in the final phase, cutting off tourists from the historical monument.
The government had taken up the 5.1-km ghat road with an outlay of `31 crore. The road has 17 hairpin bends with retaining wall and it was first proposed in 2010, but it failed to materialise.
Later, the Kondaveedu Fort Development Committee managed to get things moving and the work started in 2015. Now, the ghat road construction is near completion, but just when it appeared that improved accessibility to the fort would be a reality, the government failed to release the bills and the contractor stopped work.

The Kondaveedu Fort is the only historical fort in Guntur district. The firm, Ramachandra Construction, began work on the road in July 2015 but it has failed to pay the workers for the past four months.
This led to the labourers drifting off and finding work at other sites.
According to sources, bills worth around Rs 6.5 crore are pending and contractor attempts to get them cleared have been futile.

According to reports, laying of 3 km length of road has completed and work on the remaining 2.1 km is in the final stage. Contractor Subba Rao said that efforts of getting bills did not yield results and they failed to pay wages to workers.
Convener of Kondaveedu Fort Development Committee K Siva Reddy said that he submitted a representation to Civil Supplies Minister P Pulla Rao urging him to complete the final stage of ghat road works at the earliest.

He said the Minister promised to look into the issue. He said the Department of Archaeology is taking up work to restore some important monuments like Mutyalamma Cheruvu, Vedulla Cheruvu, Nemalla Buruju, Khilla Bhuruju and the garrison. 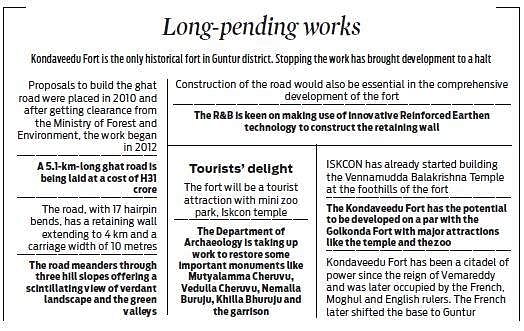