Safety of destitute women goes for toss in Visakhapatnam

While Monday’s rape of mentally-disabled woman hit the headlines, the exploitation of underprivileged in the city is common and often goes unreported.

VISAKHAPATNAM: The recent rape of a woman on the city footpath in broad daylight has brought the issues pertaining to the safety of the destitutes to the fore. This is not the first such incident as several cases of atrocities including the murder of a destitute woman at Poorna Market were reported earlier. Unreported attacks on beggars by drunk persons in One town and few other areas are said to be common.In the late night on October 17,  a 45-year-old woman was murdered by a rag picker near the Kota Veedhi Arch in One town. A day after, it was suspected to be a murder by unidentified miscreants.

But, the investigation by One Town police revealed that it was a case of sexual assault and the accused killed the woman as she resisted his advances. The city also reported a gang-rape on a destitute woman in January this year. The recent broad daylight rape of a 40-year-old woman on the footpath in public view by a drunk lorry driver at Railway New Colony has posed the question on the safety of the destitute women including beggars. 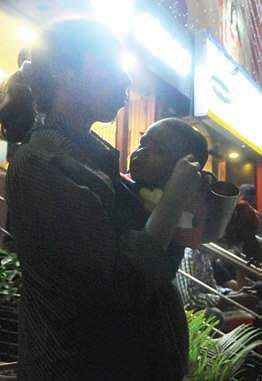 According to officials from Women and Child Welfare Department, a number of women from interior areas of Visakhapatnam Agency and rural areas of the district flee their houses after the tiff with their husbands over several domestic issues. Many of them resort to begging on the roads, traffic signals and at the railway station.

Barring a few who manage daily wager’s job, the rest continue to live under the flyovers and on roads. Sources from Women and Child Welfare Department say that Thatichetlapalem, Kancharapalem, Madhurwada, PM Palem, Arilova and a few other areas which the destitutes have made their home.

Some women even hire babies from poor parents on a daily basis and beg in the streets and crowded junctions.  In the recent past, the city has witnessed several incidents of unidentified persons attacking the destitutes—both men and women in the areas including I-Town, II-Town, NAD Junctions, but the officials say that most of them go unreported.

In July, a woman from Visakhapatnam Agency along with her three children left her house after a family dispute and was found roaming on the city roads. After few section of media highlighted about the lack of safety of the woman and her children, Women Commission chairman Nannapaneni Rajakumari reached Vizag the very next day and had conducted searches.  Finally, the woman was traced in Srikakulam district. Though Nannapaneni instructed the officials to initiate measures to ensure the safety of the destitutes especially women, no action has been taken.

The Women and Child Welfare Department officials do not even have an idea about the number of destitutes roaming on the city roads.“The Women and Child Welfare Department, with the help of police, have conducted a series of drives and rehabilitated the destitute women in the Safe Houses at Chinamushivada. But, many of them are reluctant to stay there and flee citing various reasons. We have conducted a survey many a time.

We advise the destitutes not to sleep in the open on footpaths, under flyovers, slum areas as it is not safe. However, the easy money they make from begging bring them back on the roads again,” says district child protection officer A Satyanarayana. The women make around `500 a day from begging, so they do not want to live in the Safe Houses, he adds. The Chinamushivada Safe House with a capacity of 50 has 30 inmates at present.

What the officials say
Many women from interior areas of Agency and rural areas flee their houses after domestic issues
Many of them resort to begging in the streets, traffic signals and at the railway station and live on the roads
Women reluctant to stay in Safe House as they make around Rs 500 a day from begging

More from Andhra Pradesh.
Now we are on Telegram too. Follow us for updates
TAGS
women Visakhapatnam safety