A staggering nearly four lakh people have applied for just 2,723 police constable posts. Interestingly, doctors, engineers and other professionally qualified people are among the applicants.

VIJAYAWADA: A staggering nearly four lakh people have applied for just 2,723 police constable posts. Interestingly, doctors, engineers and other professionally qualified people are among the applicants. The post offers a monthly salary of over Rs 20,000 per month.

State Level Police Recruitment Board (SLPRB) has received a whopping 3,94,387 applications make it a very tough competition. Those who have completed postgraduation, B Tech and other graduation courses have applied for the posts for which Intermediate is the minimum educational qualification, officials said.

According to data released by the SLPRB, around 10,216 PGs and 1,17,357 graduates have applied for the constable posts. The notification for the police recruitment was released on November 11.

This is not the first time that PGs and graduates have applied for constable posts; rather it has witnessed a sharp rise this year. As on December 7, the last date for submission of the applications, out of the total number of applications received, 3,32,381 are male and remaining are 62,006 female applicants.

Candidates will be able to download their hall tickets from December 24, 2018 to January 4, 2019 by logging on to website slprb.ap.gov.in 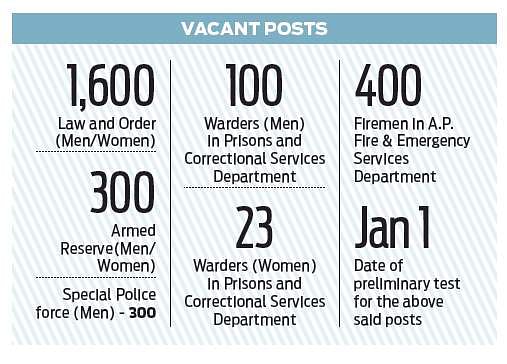 Stay up to date on all the latest Andhra Pradesh news with The New Indian Express App. Download now
(Get the news that matters from New Indian Express on WhatsApp. Click this link and hit 'Click to Subscribe'. Follow the instructions after that.)