Cyclone Phethai made landfall in East Godavari district at 12.30 pm on Monday afternoon at Bhairavapalem between Yanam and Katrenikona.

KAKINADA: Cyclone Phethai made landfall in East Godavari district at 12.30 pm on Monday afternoon at Bhairavapalem between Yanam and Katrenikona. However, no loss of human life directly due to the storm was reported.

District Collector Karthikeya Mishra said under the fury of the cyclone, which had intensified into a cyclonic storm, 99 villages were severely affected in many mandals of the district. As many as 50 roads, including Kakinada-Uppapada, Talarevu Seashore Road, Katrenikona and the path proceeding towards Kakinada rural areas were damaged.

Power supply was disrupted since 2.30 am on Monday. Repair works were underway and power supply was expected to resume sometime during the night. Although the department readied 400 electric poles, none were replaced. Cell phone networks were affected due to the power outage for 13 hours.

Thousands of coconut trees were uprooted across Kakinada. Tonnes of sea water fell on the Uppada-Kakinada beach road and submerged four huts. However, there were no casualties, Mishra said.It rained throughout the day in Tallarevu; the weathermen measured 16 mm rainfall.

Four passenger trains — two to Vijayawada and two to Visakhapatnam — were cancelled from Kakinada on Monday morning. They will remain cancelled on Tuesday also, railway sources said, adding the total loss would be enumerated later.

Due to cyclone Phethai, 50 per cent APSRTC buses in Kakinada, 70 per cent in Amalapuram and around 25 per cent of buses from its Rajahmahendravaram depot were cancelled. The corporation suffered a loss of around Rs 39 lakh, APSRTC sources said.

District officials, who have been monitoring the cyclone for the past 24 hours, convened coordination meetings every 30 minutes on the day.

Paddy crop and aquaculture fields were also affected and the extent of losses may be enumerated on Tuesday. Officials of agriculture, horticulture and sericulture departments were on a district-wide tour to take into account the losses, sources at the Collectorate said. 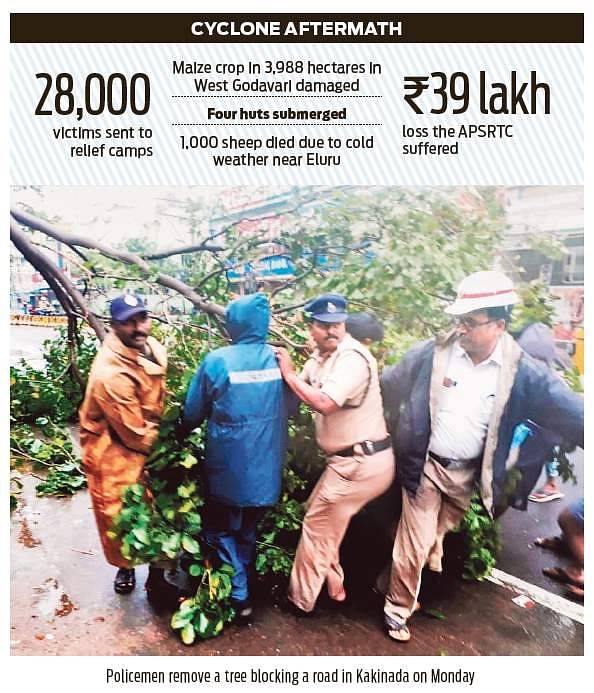 The administration set up 178 rehabilitation camps for 28,000 people in 14 mandals of the East Godavari district. The local fishermen, who refused to take shelter in these camps,  were provided with food and water at their houses.

Later, they too were shifted to relief centres, the Collector added. The IMD, in a release, said, “Phethai moved north-­northeastwards into a deep depression at 5.30 pm. It is likely to cross coast close to Tuni on Monday night.”

Stay up to date on all the latest Andhra Pradesh news with The New Indian Express App. Download now
(Get the news that matters from New Indian Express on WhatsApp. Click this link and hit 'Click to Subscribe'. Follow the instructions after that.)
TAGS
Cyclone Phethai