The data since 2011 shows that there were a total of 110 cases of rejection of the shrimp consignments from Andhra Pradesh by the three major markets due to presence of antibiotics.

VIJAYAWADA: Even as Andhra Pradesh remains one of the top exporters of shrimp in India, the issue of excessive usage of antibiotics in its culture continues to affect the State as the number of consignment rejections have not gone down. Official data shows that 60 per cent of the total rejections of the consignments from the State were due to the presence of antibiotics in the shrimps.

According to the Marine Products Exports Development Authority (MPEDA), the three major export markets for shrimp — European Union (EU), USA and Japan — rejected 45 consignments from India till November this year. Of them, 12 were rejected as the shrimps did not meet the safety standards prescribed by the authorities abroad. “Out of the 12 rejections due to the presence of high antibiotics, nine were from Andhra Pradesh,” says the MPEDA data.

The data since 2011 shows that there were a total of 110 cases of rejection of the shrimp consignments from Andhra Pradesh by the three major markets due to presence of antibiotics. This accounts to 51.8 per cent of the total rejections (due to various reasons) from the State.  It may be noted that Andhra Pradesh exports around 70 per cent of shrimps from India.

The Fisheries department officials admitted that even though there has been a marginal decrease in the usage of excessive and banned antibiotics, there was a long way to go. They added that rejections were particularly high with respect to the consignments sent to European Union.

Speaking to TNIE, Commissioner of Fisheries Rama Shankar Naik said that the department has chalked out a multi-pronged approach to tackle the menace. “It is true that the usage of antibiotics has been high, but we have formed district-level task forces, which are monitoring farms, hatcheries, feed suppliers and processing units. Besides monitoring, the task forces are also creating awareness among farmers and other stakeholders, which has shown positive results,” he explained.

The task force consists of officials from MPEDA, fisheries, drug control and other departments. The officials said notices were issued to 38 hatcheries and 33 aqua shops this year.He explained that the middlemen between farmers and processing units were one of the major causes for the menace. He said the department was proposing that the processing units carry out a farm audit before purchase of shrimps. “If processing units reject stock, the farmers will stop using antibiotics,” he said. 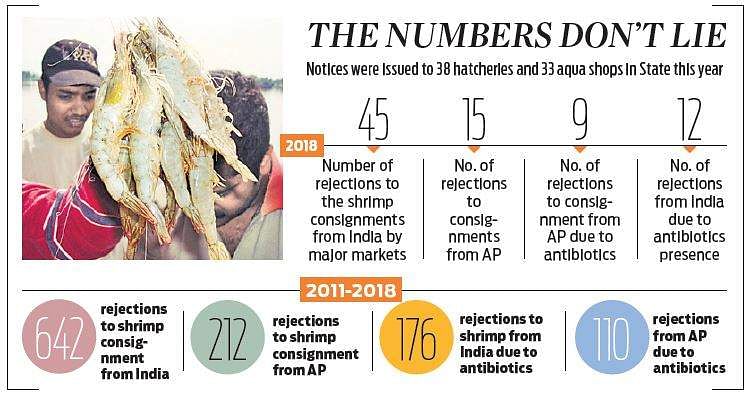