The authority had also faced criticism in August for issuing bonds worth Rs 2,000 crore at 10.32 per cent interest to be paid quarterly for a period of 10 years.

VIJAYAWADA: Andhra Pradesh Capital Region Development Authority (APCRDA) has made significant strides in 2018 from finalising the designs of the administrative structures to launching almost all works planned in the Phase-1 of the capital construction.

With a sense of accomplishment, the APCRDA, which completes four years of formation on Sunday, is now looking forward to wrap up the works as Amaravati, in all likelihood, would become the indispensable indicator of the State government’s performance ahead of the 2019 polls.

Even though fingers are frequently pointed at the authority that there has been no concrete development, the APCRDA, in the past 12 months, has been able to freeze not just the design of the Amaravati Government Complex (AGC), but also the funding strategy. 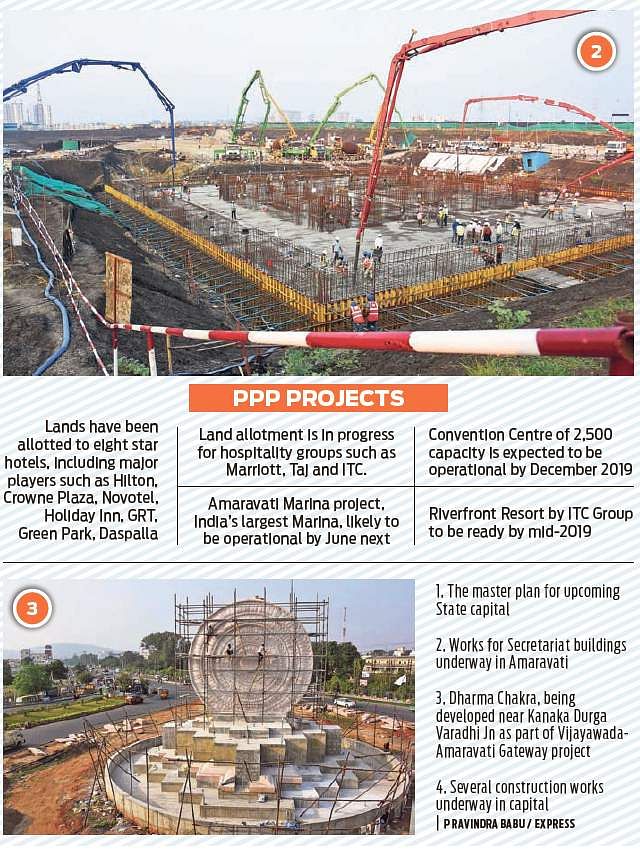 The AGC is the core area in the Amaravati region, which houses the key legislature, judiciary and administrative buildings such as the Assembly, High Court, Secretariat and others.

“We made progress with respect to designing, tendering and launching the works of the AGC. We have already started the construction works related to the Secretariat and the high court, and tenders for one package of the iconic Assembly complex will be floated shortly. Of the total Rs 51,687 crore planned works in the Phase-1 of capital construction, we were able to launch works worth Rs 39,875 crore. So, in a nutshell, 2018 has been the year of execution of Amaravati,” Principal Secretary (APCRDA) Ajay Jain told TNIE.

On the funding front as well, the authority had an eventful year as it successfully ventured into the capital markets through the issuance of Amaravati Bonds-2018. Through the bonds, the authority raised Rs 2,000 crore. Besides, it has also gotten a loan commitment for Rs 2,060 crore from various banks and is in the process of securing another Rs 10,000 crore loan from the banks. “We are also going for the issue of public bonds worth Rs 1,000 crore (Rs 500 crore in two tranches) shortly. This year, we were able to achieve the closure of financial deals worth Rs 15,000 crore to Rs 17,000 crore,” Jain explained.

The housing projects, proposed for the officials and public representatives, have reached the final stage of construction. The 3,840 flats and 186 bungalows, for which works began in November/December last year, are expected to be ready for occupation by March 2019.

While the picture of Amaravati may appear rosy, it isn’t a city without challenges. The much-publicised Start-up area, to be developed by the Singapore Consortium, is yet to take off even after six months of the stakeholders — APCRDA, Amaravati Development Corporation Ltd (ADCL) and the State government — signing the agreement. The officials maintain that the works would begin in January 2019.

Similarly, the authority has failed in delivering its promise of returning developed plots for the farmers, who parted with their lands. As per the Land Pooling Scheme (LPS) Act, the APCRDA was required to return development plots within three years of procurement of the land. The authority, however, is still in the process of engaging contractors to develop half of the 13 LPS zones.

Progress of the roads has not been as significant as housing. The Seed Access Road, launched in 2016, is yet to attain its complete shape owing to the pending land acquisition. The officials said that slow progress was because of the underground utilities were being developed simultaneously. Of the 320-km road network, 285-km road works are underway, and are expected to be ready by early 2019. Furthermore, the APCRDA is yet to procure 2,400 acres and is expected to take them invoking the Land Acquisition Act.

The authority had also faced criticism in August for issuing bonds worth Rs 2,000 crore at 10.32 per cent interest to be paid quarterly for a period of 10 years. Financial experts had slammed the government, which issued unconditional guarantee to the bonds, for raising money at high-interest rates as debt servicing for the cash-strapped exchequer would be an issue.  By the end of 10 years, the APCRDA will have paid more than Rs 3,573 crore (Rs 2,000 crore principle + Rs 1,573 crore interest) towards the money raised through bonds.

Even as the authority is overcoming each hurdle at a time, what can people look forward to in 2019 with regard to Amaravati? “This year, all the works were underground since they were related to the foundation; 2019 will be the year where people will see a definitive and a visible development,” Jain concluded.

Stay up to date on all the latest Andhra Pradesh news with The New Indian Express App. Download now
TAGS
APCRDA