Chairman Nand Kishore Singh, however, maintained that the 15th Finance Commission will positively take into consideration the demands of the State, which are within its purview.

VIJAYAWADA:  Observing that the Centre was using the 14th Finance Commission (FC) report as a ‘ruse’ to not accord Special Category Status (SCS) to Andhra Pradesh, 15th FC Chairman Nand Kishore Singh clarified that the issue of SCS does not form a part of the framework of the commission. 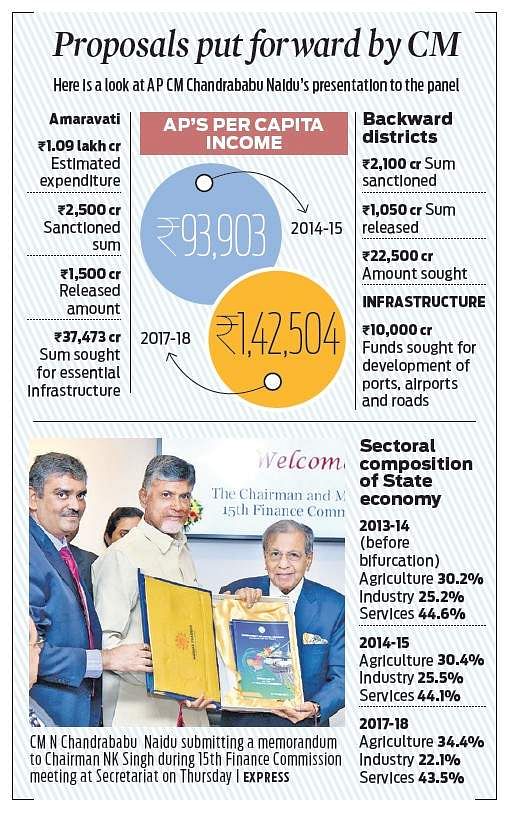 NK Singh said, “Where you are terrifically right is... the FC had nothing to do — and (actually) it has nothing to do — with that particular observation (on SCS)  in the (14th) commission report, which is providing the Central Government a ruse.

Because, if that sentence (regarding SCS) had not been used, then perhaps this particular argument (denying SCS) that Finance Minister Arun Jaitley and his colleagues are using at you..., that fiction may not have existed for the Central government.”  He also observed that the 14th Finance Commission report was not backed up by more detailed analytical or methodological study.

However, later at a press meet, NK Singh chose to refrain from making a comment when asked why the Centre was hiding behind the 14th FC report for granting SCS.Adding that the issue of SCS does not directly or indirectly or remotely form a part of the detailed terms of reference given to the FC, he said, “If you want to say that if SCS doesn’t form part of the framework of FC, why the earlier commission had done it, and ask if the present commission would be in a position to review it, then it is another matter. Technically speaking, every FC supersedes the previous commission.”

He, however, acknowledged the issues being faced by the State due to ‘sudden’ and ‘imposed’ bifurcation and assured the CM that the 15th FC would do the best within its capabilities to help the ‘burdened’ State.
Naidu gave a detailed presentation to the members of the 15th FC on the State’s socio-economic situation. He appealed to the members to accord SCS, consider population as per 1971 census, continuation of revenue deficit grant, disaster relief for crop failure and grants for development of capital Amaravati  and special assistance to backward districts and other infrastructure.

“Our State is a political victim. It is a victim of the century. Progressive States should not be punished. We are only requesting for a level-playing field, which is the responsibility of the Centre to create. We are also paying taxes and contributing to national development. So, why punish us?” he said. He also pointed out that the Centre had not implemented several provisions of the AP Reorganisation Act, 2014, and sought the commission’s liberal assistance keeping in view the bifurcation woes.