Principal Secretary (Energy) Ajay Jain on Friday said that power connectivity would be restored completely in the cyclone-affected villages of Srikakulam district by October 22.

SRIKAKULAM/VIJAYAWADA: Principal Secretary (Energy) Ajay Jain on Friday said that power connectivity would be restored completely in the cyclone-affected villages of Srikakulam district by October 22.  Speaking to media persons here on Friday, Jain said in as many as 33,300 electricity poles got uprooted and power cables got disconnected. According to him, seven TRANSCO high tension power towers were damaged. Already Ichapuram HT tower has been re-installed.

At most of the places, new poles are being erected and new lines are being installed. For restoration works, as many as 250 cranes from Guntur, Eluru, Visakhapatnam, and Vijayawada have been engaged along with 20 pole drilling machines.

As many as 9,900 workers have been pressed into service. The workers from West Bengal, Tamil Nadu, and Karnataka have also been involved in the restoration works. Till 100 per cent power connectivity is restored, nearly 10,000 workers will stay put in the district along with higher officials. Moreover, the workers and the power utilities staff did not even went to their homes for Dasara.

“We request the people to understand the situation and cooperate with us,” he appealed. Commending the efforts of APSPDCL officials, IT minister tweeted: “Braving the rough terrain and tough conditions, officers and staff of EPDCL are working day in and day out to restore power in affected villages. Respect!

Due to the damage caused to the power grid near Palasa in cyclone Titli, power distribution in Telangana, Tamil Nadu, Kerala, Karnataka and AP was affected.  With Talcher-Kolar line suffering damage, the supply of 3,000 MW of power has been interrupted, which saw power generating companies increasing power tariff to Rs16 per unit. The power grid was restored on Thursday. 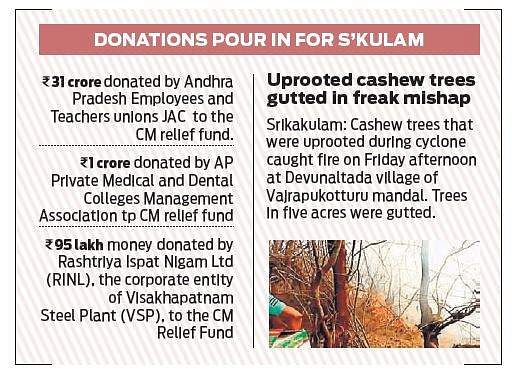 Now we are on Telegram too. Follow us for updates
TAGS
Srikakulam villages TRANSCO Cyclone-affected villages