The stage is set for Dharma Porata Deeksha to be held in Proddatur on Tuesday.

One lakh people are expected to attend the meeting. Huge LED screens and floodlights have been installed at the venue. The Chief Minister would pay a four-hour visit to the district on Tuesday. He would unveil a pylon marking the release of 12 tmcft of water to the Gandikota Reservoir on the occasion. In fact, the Dharma Porata Deeksha was scheduled to be held here on October 20, but was postponed to October 30 due to heavy rain and stagnation of water at the venue. 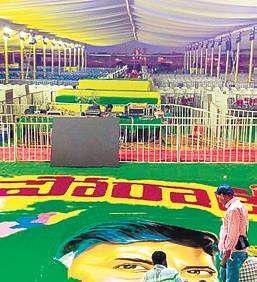 Keeping in view the all-party committee’s warning of obstructing the meeting, if the Chief Minister failed to announce the date for laying foundation stone for the construction of steel factory, the police made elaborate security arrangements.

According to official sources, the Chief Minister would arrive at the venue by helicopter around 2 pm. After unveiling the pylon, he would participate in the Dharma Porata Deeksha from 2.20 pm to 4.55 pm and address the gathering.

People waiting with bated breath for big announcement
People are eagerly waiting for the CM’s announcement on the establishment of steel plant in Kadapa. Naidu, a couple of months ago, addressing the fast unto death agitation of TDP MP CM Ramesh, announced that the State would construct the steel factory with the help of SAIL, if the Centre failed to do so.