Sources said that the scope will be reappropriated to the State’s financial position as the new dispensation has inherited almost empty coffers.

VIJAYAWADA: The YSRC government, which is yet to unveil its development plan for Amaravati, is said to be reworking on the scope of the capital city project proposed by the previous TDP regime. The authorities have asked the Andhra Pradesh Capital Region Development Authority (APCRDA) and the Amaravati Development Corporation Ltd (ADCL) to prioritise the projects to be taken forward and submit a list along with the funds required for executing them. Sources said that the scope will be reappropriated to the State’s financial position as the new dispensation has inherited almost empty coffers.

The move comes after the authority directed all the consultants, including master architect Foster + Partners, to ‘demobilise’, and ‘annulled’ the bidding process to identify consultants for other awarded projects. A CMO team is said to be working on a strategy – likely to be announced soon – with experts on how to go about the project and pool resources.

Explaining what reworking of scope means, a top-ranking official said, “For instance, eight-lane and six-lane roads were proposed initially. Now, we are preparing a model that will have two-lane roads. We were also asked to prepare a prioritised list of projects and the funds required for their execution from November. We will submit the list in a few days.”

The official, however, did not call the exercise downscaling. “It is more of a pragmatic approach to building capital,” the official said, requesting anonymity. Chief Minister YS Jagan Mohan Reddy is likely to hold a departmental review meeting with APCRDA officials after his US visit, scheduled for the third week of August. While the authority, in its communication to the consultants, said that the decision to ‘demobilise’ the teams was taken as the expert committee’s review of the projects would take time, Municipal Administration and Urban Development Minister Botcha Satyanarayana told TNIE that experts submitted preliminary reports. “We have received the preliminary reports. We are examining them,” he said. Asked when the government would make its stand clear on Amaravati, he said, ‘soon’.

Even though Botcha Satyanarayana and his colleagues have been maintaining that the government would develop one of the best capitals in the country, a sense of uncertainty still prevails among the stakeholders. While the contractors and the consultants are clueless about what is in store for Amaravati, the farmers, who had given their lands for the capital construction, are the most worried lot. With annuity payments for this year still pending, they recently went into a huddle to assess the situation.

The previous government had taken the lands promising them plots in developed layouts in return. Though plots were provisionally allotted, the layouts haven’t been developed. “We knew we were taking a risk by giving lands basing only on the confidence we had in one person (Chandrababu Naidu). But, we had an agreement with the government, not the person. If the government decides to downsize the project, we will be the sufferers. So far, we have just been getting indications of downscaling the project. Once the government announces its plans, we will chalk out our plan of action,” a farmer, who participated in the farmers’ meeting recently, said. About 21,000 farmers had given 33,000 acres of land under the Land Pooling Scheme (LPS).

Their apprehensions are not unfounded given that Amaravati was buzzing with intense activity just until a few months ago. In fact, about six months ago in February, the APCRDA was swamped with work, making arrangements for an ‘international summit’ in which infrastructure projects worth over Rs 10,000 crore were launched. Over 25,000 people - top-rated architects, designers, contractors, consultants, workers and officials -- were working on what was touted to be the ‘dream capital’ of Andhra Pradesh. Cut to the present, not even a tenth of construction workers can be seen there.

What’s changed in the last few months that led to a 180-degree flip? There has been a change of guard in May when YS Jagan Mohan Reddy’s YSRC swept the polls. The new Chief Minister within 15 days of taking charge constituted an expert panel, and subsequently a cabinet sub-committee, on June 14 to look into the engineering works in Amaravati and other departments ‘to rectify existing discrepancies and prevent corruption’. The projects which managed to achieve progress of 25 per cent are being reviewed and those which were awarded to an agency but have not taken off were ordered to be cancelled. The work has almost come to a standstill since then.

Amaravati, an ambitious flagship project of former CM and TDP supremo N Chandrababu Naidu, has been a contentious one since its inception in December 2014. Several farmers, NGOs, political parties and experts were against taking tens of thousands of acres of one of the most fertile lands of the State. A few of them even complained to the World Bank, which was to provide $500 mn loan along with the Asian Infrastructure Investment Bank (AIIB), alleging irregularities in land procurement, eventually leading to both international lending agencies backing out of the project last month. The YSRC government claimed that the irregularities in land procurement during TDP’s rule were the reason for it. But, Naidu and his partymen vehemently refuted the claim and attributed it to the new government’s ‘mishandling’ of the issue. The TDP was also accused of insider trading, with Jagan himself dubbing Amaravati a huge scam.

The State government’s decision to put the capital city project on the back burner elicited mixed responses from Opposition parties and experts. TDP MLC and former minister Nara Lokesh said that such moves would shake investors’ confidence and dent the credibility and image of the State as well as the project.

Former chief secretary IYR Krishna Rao felt that it was a more realistic approach to assess the priorities instead of creating an artificial hype. “Amaravati has never been a practical project. I don’t think it will shake the investors’ confidence as there’s nothing realistic in it. The new government’s move is a practical approach, given the socio-economic conditions of the State,” he observed. The project, as envisaged by Naidu, was expected to cost Rs 1.09 lakh crore.

AP Congress Committee vice president N Tulasi Reddy, however, termed Jagan government’s move regressive. “Instead of putting the works on hold, the State government should fund them as much as possible and mount pressure on the Centre to provide funds as per Section 94 of AP Reorganisation Act, 2014. Further, the decision will also hurt the State’s investment potential as investors’ confidence will be dented,” he said.

CPM State secretary P Madhu , on the other hand, welcomed the government’s decision to probe the ‘irregularities’. “In the last five years, the previous TDP regime hadn’t done anything substantial in Amaravati to impact investments and jobs. However, the government should expedite inquiry and reverse tendering so that the State is not bereft of a capital for long,” he observed. The ruling party leaders, however, maintained that the exercise was being done for the benefit of the State. They are of the opinion that a capital should organically grow but shouldn’t be developed using public money especially when the State’s finances are in the red. “There is no truth that the investors’ confidence would take a beating. There were no investors in Amaravati, only contractors. We are doing this in the interest of the public. This is not vendetta politics. Our government is committed to developing the capital, but it will be done as per our financial position. There need not be any concerns,” minister Botcha Satyanarayana reiterated. 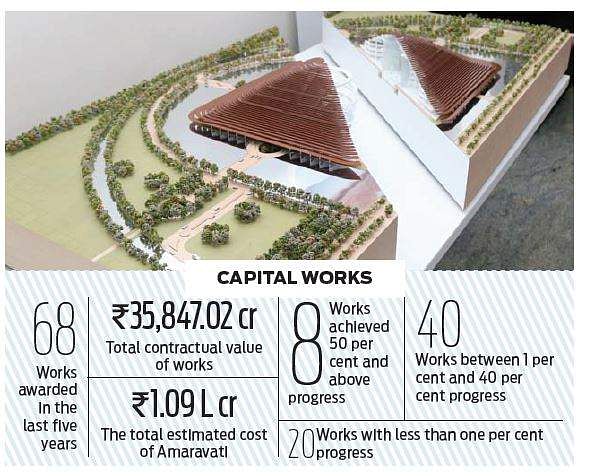 Now we are on Telegram too. Follow us for updates
TAGS
Amaravati Jagan government Andhra Pradesg APCRDA