With floods in river Godavari receding, the second level warning issued at Dowleswaram barrage was withdrawn on Monday.

RAJAMAHENDRAVARAM /KURNOOL /VIJAYAWADA: With floods in river Godavari receding, the second level warning issued at Dowleswaram barrage was withdrawn on Monday. However, the level-one warning is expected to continue for another two days as four lakh cusecs from Pranahita was released into the Godavari.

Meanwhile, copious inflows into Srisailam project on river Krishna from Jurala continues and hydel power production on Telangana side commenced. On the other hand, IMD Hyderabad issued heavy rainfall warning for the next 24 hours in the coastal district of the State. 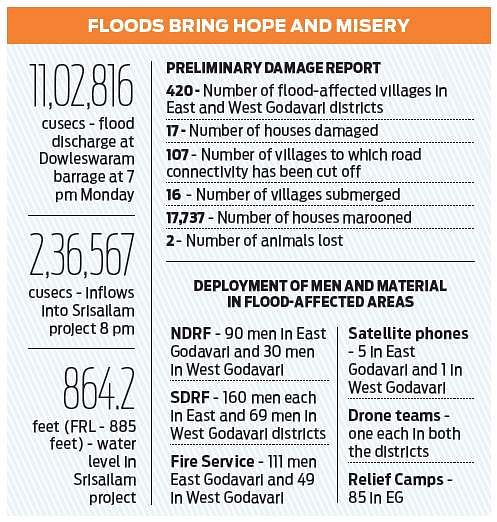 On Monday at 7 pm water discharge through 175 gates of Dowleswaram barrage stood at 11,02,816 cusecs. Water levels in the river at Chintur, Kunavaram, Polavaram is also receding. Around 400 villages in East Godavari and West Godavari districts have been affected due to floods.

Till Monday morning around 87 relief camps, including two in West Godavari district, were operated to shelter around 18,000 people evacuated from flood-affected villages. However, with floodwater steadily decreasing, people started leaving relief camps and heading back home.

On the directions of Chief Minister YS Jagan Mohan Reddy, ministers Alla Nani, Pilli Subhash Chandrabose, K Kanna Babu and P Viswaroop visited the flood-affected villages in agency areas of East Godavari district including A Veeravaram and Musurimilli in Devipantam Mandal. They interacted with victims and supervised the distribution of relief material including essential commodities.

On the occasion, the ministers observed that high flood levels in the river were due to the Polavaram cofferdam. They said had the previous government implemented R&R for the villages upstream of the cofferdam, which are likely to get submerged during floods, today’s situation would not have arisen.

Meanwhile, following continuous rains in the upper catchment areas of river Krishna, heavy inflows continued into the Srisailam project.  At 8 pm on Monday, water levels in the project were at 864.2 feet against FRL of 885 feet. The volume of water was at 119.49 TMC and the inflows were at 2,36,567 cusecs.