Floods receding in East Godavari, but no relief as yet

Though the floodwater has started receding in East Godavari since Tuesday, the situation is still alarming, particularly in Devipatnam mandal and island villages.

RAJAMAHENDRAVARAM: Though the floodwater has started receding in East Godavari since Tuesday, the situation is still alarming, particularly in Devipatnam Mandal and island villages.  Residents of Konaseema have got some respite as the floods that wreaked havoc for the past one week started receding in Amalapuram and other villages.

Amalapuram RDO Venkataramana said 90 NDRF, 157 SDRF and 111 firefighting staff are actively participating in rescue operations. It is learnt that road communication was disrupted to 64 villages. The people of Devipatnam mandal are facing several problems as rescue operations are going on at a slow pace.  Distribution of food is getting delayed as it is being prepared only at one place. Some flood-affected people are complaining that the walls of their houses are on the verge of collapse as they have been under water for almost a week. 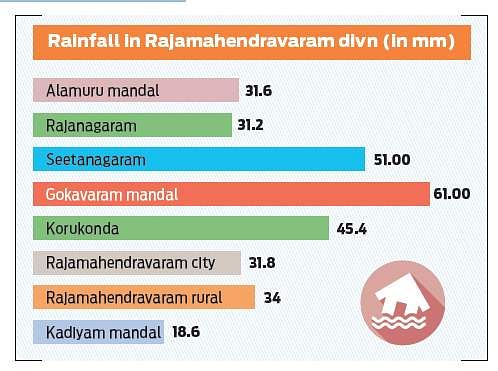 It is learnt that the authorities concerned are engaged in assessing the damage and loss in the district and have already submitted a tentative report to the government.  The officials from revenue, agriculture and other departments say it is difficult to assess the total damage  at this juncture.

According to revenue officials, the people in 20 mandals are suffering due to floods in the district.  As many as 207 villages in four mandals of Etapaka division, one each in   Rampachodavaram and Rajamahendravaram, two in Ramachandrapuram and 12 in Amalapuram division are experiencing floods. Of them, 133 villages are in Etapaka division alone. As many as 20,701 out of the total affected population of 1,17,000 are taking shelter in 93 relief camps, according to a report sent to the State government.

The administration is using 62 boats, 12 launches and two NDRF and two SDRF teams for rescue operations.  As many as 93 medical camps have been conducted so far. The authorities have sent rice, yellow gram, oil, onions, potatoes and other items to 17,984 families in the flood-affected areas. Horticulture crops were affected in 2,029 hectares and paddy in 4,175 hectares. As many as 71 electric poles were destroyed and 17 houses are damaged.  About 2-km stretch of Panchayat Raj road got damaged.

The two relief camps  at Pandiri Mahadevudu choultry and Alcot gardens in Rajamahendravaram are continuing. The Godavari water level on Wednesday stood at 53 feet at Pushkar ghat. The police are keeping a constant watch on Gowtami and VIP ghats in the city. Barricades were erected at the ghats and the people have been barred from having bath there.Commissioner of Rajamahendravaram Municipal Corporation Sumit Kumar Gandhi is monitoring the situation at the ghats and in the relief camps apart from ensuring that breakfast, lunch are distributed to flood victims.

Now we are on Telegram too. Follow us for updates
TAGS
East Godavari Devipatnam Mandal floodwater NDRF SDRF