RAJAMAHENDRAVARAM/SRIKAKULAM/KURNOOL: Second flood warning was issued at Gotta Barrage on Vamsadhara in Srikakulam district and at Dowleswaram Barrage on the Godavari in East Godavari district with water levels in both the rivers rising at an alarming level from Wednesday night.

Incessant rains in the upper catchment areas of Vamsadhara in Odisha led to heavy inflows into the river at Gotta Barrage and Thotapalli Barrage on Nagavali. Flood discharge at Gotta Barrage touched 1.11 lakh cusecs on Thursday morning, forcing authorities to issue a third warning, which was withdrawn after a few hours. Similarly, a second warning was issued at Thotapalli Barrage, when flood discharge touched 43,479 cusecs. However, it was withdrawn with inflows receding by the evening. 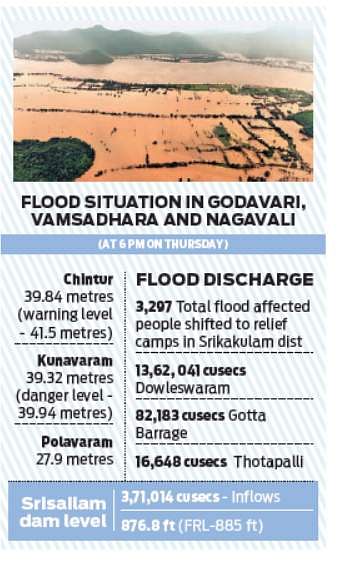 Barrage officials observed that the blood flow is receding and they might withdraw second warning by midnight.  At Thotapalli, flood discharge stood at 16,648 cusecs with inflows being at 18,037 cusecs. AFloods in both Vamsadhara and Nagavali threw normal life out of gear in LN Peta, Kotturu, Hiramandalam and Bhamini mandals of Srikakulam district.

According to AP State Disaster Management Authority officials, a total of 3,297 people were sheltered in relief camps. A 60-member NDRF team and a 35-member SDRF team were deployed for rescue and relief operations in the flood affected villages in the district.
A 40-year-old man identified as Danta Amma Rao is feared drowned when he accidentally fell into the canal at Gara in Srikakulam on Thursday morning. Police, fire and revenue personnel launched search and rescue operations.

Following heavy discharge from the rivers and inclement weather, sea along Srikakulam coastline is rough. Beach at Kalingapatnam was eroded. Statues at the beach got drowned.  Srikakulam District Collector J Niwas, along with Roads and Buildings Minister Dharmana Krishna Das, is closely monitoring the flood situation.

On the other hand, flood level in Godavari continued to increase with heavy inflows from its tributaries Indravati, Sabari and Sileru.

“At 12 noon, we issued the second warning when the flood discharge at Dowleswaram Barrage crossed 13 lakh cusecs mark. At 6 pm, flood discharge level stood at 13.62 lakh cusecs,” Irrigation official Mohan Rao told TNIE. Though they are expecting the flood level to recede by night, with heavy inflows from Indravati, Sileru and Sabari and steady inflows from Pranahita, the flood level may increase again by Friday morning. At Bhadrachalam, water level stood at 44.2 feet and the first warning was issued.

A total of 43,293 people in East and West Godavari districts were shifted to safer places and relief camps. In East Godavari, 104 relief camps are functioning. Several villages in agency areas of twin Godavari districts remained cut off with flood level not receding. At Polavaram project site, the water level stood at 27.9 metres at 6 pm and it is still rising. According to irrigation officials, predicting the exact water flow in the river has become a problem due to the cofferdam and spillway as the half finished structure has become unregulated balancing reservoir.

Chief Minister YS Jagan Mohan Reddy on Thursday made an aerial survey of the flood affected areas in East and West Godavari districts to take stock of the situation. He announced Rs 5,000 each to the families whose dwellings were submerged in the floods, and instructed officials to take relief and rehabilitation measures on a war-footing. in Agency areas of Paderu division, particularly Pedabayalu, Munchingput and G Madugula mandals in Visakhapatnam district, several tribal habitations remained cut off for the third consecutive day on Thursday.  Most of the tribals were unable to move out of their dwellings due to incessant rains.

Several rivulets in the Agency, including  Surimetta Gedda, Rallagedda and Logiligedda, and small streams are overflowing disrupting road communication. Tribals were facing problems due to shortage of essentials as weekly shandies were not held due to incessant rains.
Meanwhile, various reservoirs are reaching full level following heavy rains in their catchment areas. Authorities lifted three gates of Sileru dam to release flood water.