KURNOOL: Heavy rains continue to lash upper catchment areas in Karnataka and Maharashtra, resulting in heavy inflows into Tungabhadra Dam and Almatti. With increasing flood water discharge from Tungabhadra Dam in Karnataka and Jurala in Telangana, a high alert has been sounded in low-lying areas in Kurnool city and along the river course. The floodwater is reaching Srisailam reservoir from both Tungabhadra and Krishna rivers.

Now, the Srisailam reservoir is getting 8,54,699 cusecs from Jurala project and these inflows are increasing minute-by-minute, officials said. Presently, Tungabhadra Dam has 88.90 TMC of water against the 100.66 TMC of total dam capacity. Till Sunday late evening, the dam received 2,54,261 cusecs of water. The dam officials released 2,24,000 cusecs of water from Tungabhadra Dam in Karnataka to Tungabhadra river by lifting all 33 gates.

Tungabhadra dam now looks like a full pot as it is receiving good inflows from both the Tunga and Bhadra rivers in Karnataka for the last few days. More water is likely to be released from the dam if the inflows increase. Also, Almatti dam has 97.23 TMC water against the total dam capacity of 129.72 TMC. The dam has received 6,70,947 cusecs of water. The dam officials released 6,70,000 cusecs of water from the dam at Maharashtra to Krishna River.

The outflows arriving downstream reservoir located in Kurnool district from TB Dam and Jurala project. However, Jurala is still getting 8,65,000 cusecs of water and the reservoir officials released 8,52,165 cusecs of water by lifting a total 62 spillway gates, which arrived in Srisailam reservoir. The Srisailam dam officials are also discharging the same amount of water — 7,77,888 cusecs — to Nagarjuna Sagar by lifting 10 gates out of total 12 at a height of 33 feet each.

“With heavy inflows into Krishna river and the flood flow from Tungabhadra merging with it, we are expecting inflows into Srisailam project to touch 12 lakh cusecs,” irrigation officer Vijay Kumar told TNIE. He said that once the inflows near 13-lakh mark, low-lying areas in Kurnool city will be under flood threat.

“Ten gates of Srisailam project have been lifted to a height of 33 feet and water is being released at 7,77,888 cusecs,” Vijay Kumar said. 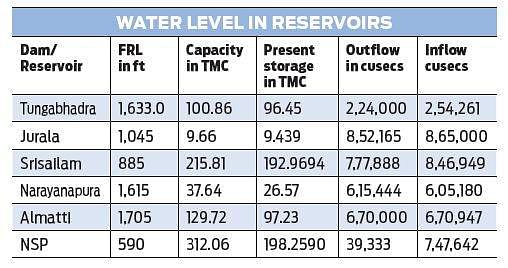 Now we are on Telegram too. Follow us for updates
TAGS
Srisailam reservoir Tungabhadra Krishna rivers Jurala in Telangana