HYDERABAD/NALGONDA : For the first time in a decade, all 26 crest gates of the Nagarjuna Sagar Project (NSP) were lifted on Monday, with a deluge of water reaching the reservoir from Srisailam. The swirling floodwaters are rushing downstream Krishna and are likely to reach the Pulichintala balancing reservoir in the early hours of Tuesday.

On Monday evening, the storage at Pulichintala was 7.94 tmcft as against its gross storage capacity of 45.77 tmcft. The water level was 135.31 ft as against the full reservoir level (FRL) of 175 ft.
After the Pulichintala reservoir fills up, the water would reach the Prakasam Barrage in Vijayawada, which is the last on the Krishna, and after which, the river joins the Bay of Bengal.

The combined discharge from all gates of the NSP was 3,67,580 cusecs on Monday evening. The water level at the NSP was being maintained at 567 ft as against the FRL of 590 ft. In 2009, when the Krishna experienced an unprecedented flood, all the crest gates were lifted. In 2014, as many 18 gates were lifted, and last year, two gates were lifted and closed within an hour. 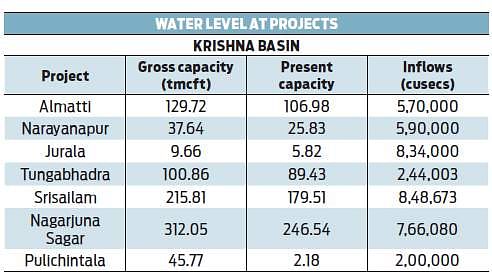 On Monday, for the first time since 2009, all gates of all the reservoirs across the Krishna, from Almatti to NSP, were opened. With heavy inflows continuing into the Almatti and Jurala projects, the water is being allowed downstream. The inflows into the projects will continue, as heavy rain has been predicted for the next five days in the catchment area.

“We have decided to open the gates of the Pulichintala, following heavy releases from the Nagarjuna Sagar,” an irrigation official of Andhra Pradesh said. “The outflows from the NSP are about five lakh cusecs per day, and Pulichilntala will be full. The flood is heavy and that is why we decided to open the gates of Pulichintala after midnight on Monday,” official sources said. The authorities are getting ready to impound 45 tmcft water in Pulichintala now, and concerns of villages being submerged have already been addressed.

Meanwhile, inflows to the Jurala Project have touched a record high of 8.34 lakh cusecs since 2009. Accordingly, inflows to Srisailam were 8,19,254 cusecs on Monday evening. The outflows from Nagarjuna Sagar were 3,67,580 cusecs, and are expected to increase further. With this, the Pulichintala too would be filled to the brim for the first time.

Hydel power generation is in full swing at Jurala, Srisailam and Nagarjuna Sagar, and is set to begin at Pulichintala too. Telangana generated 18.75 million units of power at Srisailam left, and 16.9 million units at Nagarjuna Sagar on Sunday. A Central Water Commission (CWC) advisory stated on Monday that due to heavy rains in the last 14 to 15 days upstream Krishna and Bhima basin, along with a heavy rainfall warning for the next five days, inflows are expected to be high. Due to the release of 2.8 lakh cusecs from the Nagarjuna Sagar, heavy inflows are expected at the Pulichintala project. The outflows from Nagarjuna Sagar are set to increase in the next couple of days.

Now we are on Telegram too. Follow us for updates
TAGS
26 crest gates Nagarjuna Sagar Project Srisailam Krishna Jurala