At 7 pm on Tuesday, water was discharged at 1.6 lakh cusecs and the inflow stood at 4.5 lakh cusecs.

VIJAYAWADA/GUNTUR/KURNOOL: People living in low-lying areas downstream Prakasam Barrage in Vijayawada have been put on high alert and the official machinery in both Krishna and Guntur has started evacuating people from vulnerable areas as floodwater in river Krishna is being released to the sea.
With heavy inflows into Prakasam Barrage, 70 gates have been lifted to a height of 3 feet to let the floodwater out.

At 7 pm on Tuesday, water was discharged at 1.6 lakh cusecs and the inflow stood at 4.5 lakh cusecs. With heavy inflows into Pulichintala project from Nagarjuna Sagar, 14 gates of Pulichintala project were opened to let the floodwater out at a discharge rate of 4,24,349 cusecs into downstream Prakasam Barrage. “Inflows into Prakasam Barrage are increasing hour after hour. As a precautionary measure, we have lifted all the 70 gates to release water at 25,000 cusecs initially and the same was increased to 1.5 lakh cusecs by evening and it might cross 2 lakh cusecs by night and it will increase further subsequently,” Krishna delta executive engineer A Raja Swaroop Kumar told TNIE. 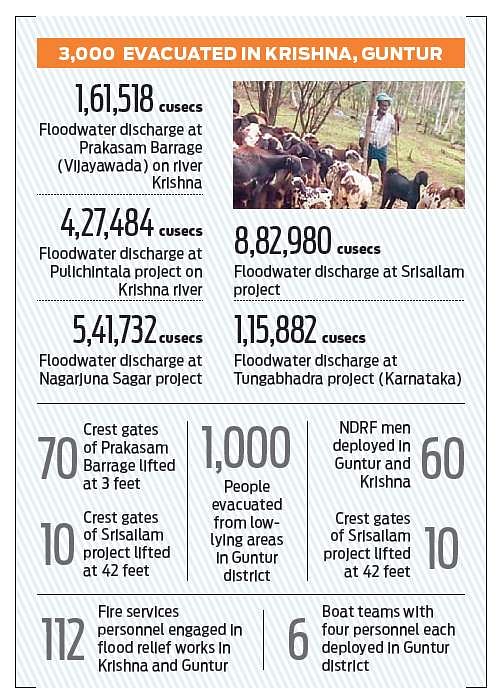 Before lifting the crest gates of barrage and releasing water downstream, a siren was sounded for 10 minutes to alert people. Officials said all the 39 vulnerable points on the flood banks of the Krishna river on both sides were fortified with sandbags. Outflow sluices at the barrage were closed.

Krishna district collector A Md Imtiyaz said all measures were in place to address any sort of contingency. The collector, who visited the low-lying areas in Vijayawada, urged the people to move to safe places as flood discharge will increase by night. A relief centre was set up at Bhupesh Nagar in Ranigari Thota area.

On Tuesday, eight shepherds along with their 400 sheep, who were stuck in floodwater in Chandarlapadu, were rescued by the district officials, within hours after receiving the news. “They have been shifted to safer locations. We have also evacuated 18 people from Gani Atkuru though they were unwilling to move, as we do not want to take risks. By evening, over 2,000 people were shifted from low-lying areas across the district,” Imtiyaz told TNIE.

Now we are on Telegram too. Follow us for updates
TAGS
Prakasam barrage Vijayawada Krishna Guntur