At present, Andhra Pradesh has less than one case for every 10,000 population and the prevalence rate is just 0.66 per cent during the 2018-19 fiscal.

VIJAYAWADA:   As part of the National Leprosy Eradication Programme, the Directorate of Public Health and Family Welfare is organising a 14-day Leprosy Case Detection Campaign (LCDC) from August 16 in 10 districts identified by the Central monitoring teams. 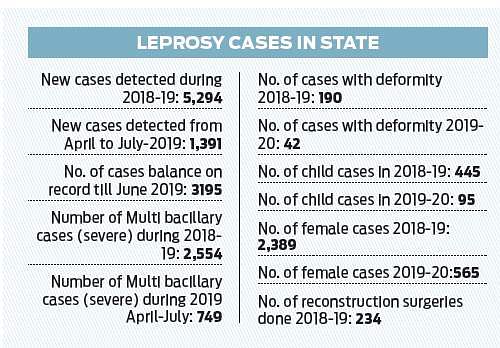 The 14-day LCDC will be held in Srikakulam, Visakhapatnam, Krishna, Guntur, Prakasam, Nellore, Chittoor, Kadapa, Anantapur and Kurnool districts. In this campaign, Asha and health workers will visit every house and ask questions related to the symptoms of leprosy.”

She said that all the district Medical and Health Officers had been instructed to organise the campaign. “People should come out of the stigma and get treated to avoid serious deformations. Free medical treatments are available at all Primary Health Centres.”

Now we are on Telegram too. Follow us for updates
TAGS
Andhra leprosy survey Leprosy eradication programme