VISAKHAPATNAM: About 20 child marriages have been stopped by the officials of Women and Child Welfare Department this year till now. There are a number of child marriages performed secretly in Visakhapatnam district.

The unhealthy trend of child marriages has taken a new turn with urban areas taking the lead. The officials opine that chances of identifying and preventing child marriages will improve with the appointment of village and urban ward volunteers as part of the new system of governance in the state.


For the last few years, the Women and Child Welfare Department, along with various NGOs, has been working hard to stop child marriages in the district, especially in rural and agency areas. 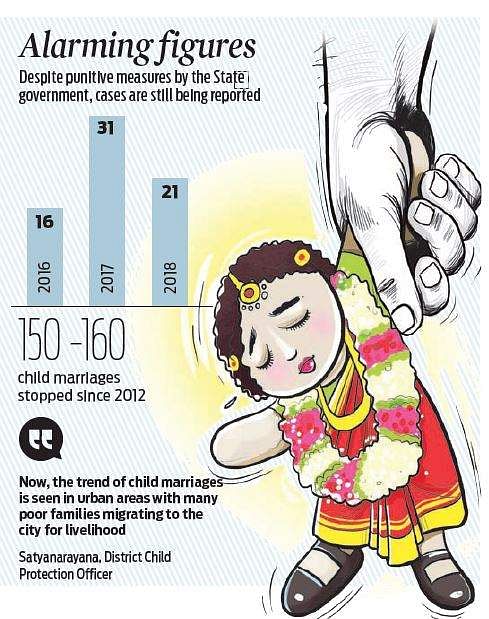 Surprisingly, some village revenue officers (VROs) who should take the responsibility to stop child marriages and bring the matter to the notice of officials, keep it confidential, leading to prevalence of  the social evil.

The number of child marriages stopped is very less, as there are hundreds of marriages being performed secretly. Apart from the agency and rural areas, child marriages are now being reported in One Town, Dwarakanagar, Arilova, Madhurawada, Gajuwaka and some other areas in the city.

The child marriages in the families of poor economic background mostly take place because of pressure from the family members and neighbours.

The parents stop the girl child’s education and marry their daughter off. There are also instances when
the minor girl falls in love. Having learnt about the affair, the parents get her married to uphold the family honour in society.

“Now, the trend of child marriages is seen in urban areas with many poor families migrating to the city for livelihood,” said Satyanarayana, District Child Protection Officer (DCPO).

The officials hope that village and ward volunteers besides ensuring the welfare schemes reach genuine beneficiaries, will see that the girl child gets education and empowerment.