In a bizarre incident, a patient suffered a bleeding injury after bitten by a bandicoot while he was sleeping in the corridor of the Kakinada Government General Hospital.

KAKINADA: In a bizarre incident, a patient suffered a bleeding injury after bitten by a bandicoot while he was sleeping in the corridor of the Kakinada Government General Hospital. He was immediately treated at the emergency ward of the hospital, but the incident exposed the negligence of authorities in maintaining the premises. The pig-rat also bit another person who rushed to the rescue of the patient.

Sources said the patient was asked by nurses to sleep in the corridor for the night even though there were vacant beds in the ward. 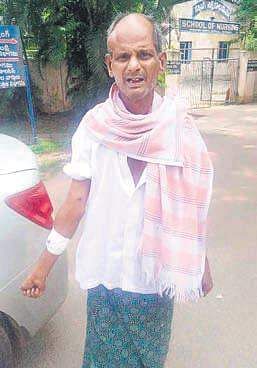 According to the relatives of the patient, Ilasavelli Paidiah, 57, from Challapalli village in Amalapuram mandal, came to the GGH last Friday for treatment for throat infection. He was admitted to the ENT ward and diagnosed with throat cancer. On Wednesday, the doctors advised Paidaiah to undergo radiotherapy, which is administered to patients only on Thursday. As it would be difficult for him to go back to his village, which is 90 km away from Kakinada, and come back for radiotherapy, Paidaiah along with his wife Nagamani returned to the bed (No 10) in the ward where he was provided preliminary treatment by doctors.

The night duty staff, however, asked the couple to sleep in the corridor as rules do not permit a patient to stay in the ward after being discharged. Following this, they slept in the corridor near the microbiology department. Around 2 am on Thursday, Paidaiah felt something crawling inside his trousers and tried to remove it. It moved towards his stomach on the right side. Paidaiah caught it with his left hand over the shirt. The object which turned out to be a bandicoot bit at his radial artery.

Panic-stricken Paidaiah and his wife raised an alarm. The attendants of other patients rushed to the corridor and saw Paidaiah bleeding from his right hand and the pig-rat clinging to his hand. As other people rushed there, the pig-rat attacked another person also.

Attendants later shifted Paidaiah to the emergency ward where he was given first aid and discharged from the hospital in the morning. When TNIE contacted, Kakinada GGH superintendent Dr M Ragavendra Rao termed the incident unfortunate. “We will order an inquiry into the incident and take necessary action against those who did not allow the patient to sleep in the ward when there were adequate beds,’’ he said.

Now we are on Telegram too. Follow us for updates
TAGS
bandicoot Kakinada Government General Hospital Amalapuram mandal