Agriculture and farmer welfare were given top priority in Navaratnalu, the nine promises made by the YSRC in its election manifesto.

To provide investment support to farmers at the commencement of crop season every year, YSR Rythu Bharosa was announced and Rs 8,750 crore was allocated for it. The scheme, to be launched on October 15, will provide Rs 12,500 per year to every farmer’s family, including tenant farmers, so they can procure seeds, fertilisers and other farm inputs.

A total of Rs 64.07 lakh farmers’ families, including 15.37 lakh tenant farmers, will benefit from the scheme. Further, it was decided to amend the Tenancy Act to provide tenant farmers with the certificate of cultivation for a period of 11 months with a right on the crop without creating any problem to the landowners.

While the investment support in the form of Rythu Bharosa ensures that the farmers don’t need to go from pillar to post for getting the needed money for farm inputs, the YSR Free Crop Insurance Scheme provides insurance cover to the crops, with the government paying the premium.

A budget allocation of Rs 1,163 crore was made for the insurance scheme. The government will take steps to provide interest-free crop loans to every farmer, including tenant farmers. The government will bear the interest for crop loans up to Rs 1 lakh which are repaid within the stipulated time. It is meant to inculcate the habit of timely repayment and financial discipline among the farming community.

“Fluctuation in the prices of agriculture produce with volatile market and losses due to crop failure are the two main reasons for most of the farmer suicides. The government has set up a Price Stabilisation Fund with Rs 3,000 crore and Natural Calamity Relief Fund with Rs 2,000 crore,” explained MVS Nagireddy, farmer leader and vice-president of the newly-constituted Andhra Pradesh State Agriculture Mission, which plans and implements the utilisation of both the funds.

Failed borewells is another major reason for the suicides, especially in the Rayalaseema region. A lot of amounts is invested on borewells and most of the time, farmers take loans for the purpose and fail to repay them.

To address the issue, the government has proposed free-borewells scheme placing borewell digging rig at every Assembly constituency and Rs 200 crore has been earmarked for the same.

Priority was given to farm mechanisation and agriculture extension activities such as Polam Pilustondi and Polam Badi.

Interestingly, Zero Budget Natural Farming was also given a budgetary allocation of Rs 91.31 crore. In the Union Budget too, allocations were made for ZBNF, despite doubts being expressed by agriculture scientists and farmers over the system, questioning its economic viability. For nine-hour free power supply in the day time, the government allocated Rs 4,525 crore.

Already it is being implemented in 60 per cent of agriculture feeders and shortly the rest will be covered.

Further, 50,000 solar pump sets will be installed in the current fiscal.

Equal priority was given to the horticulture department with a total outlay of Rs 1,531.89 crore. Coming to the aid of fishermen, the relief during marine fishing ban period has been enhanced from Rs 4,000 to Rs 10,000, benefitting 96,662 fishermen.

Ex gratia to the deceased family of fishermen was increased to Rs 10 lakh. To benefit the aqua farmers, power tariff has been reduced to Rs 1.5 per unit from Rs 2.

More Rythu Bazar and e-NAM markets are on the anvil to benefit the farmers to sell the produce directly.

“When compared to the previous year, budget allocation to agriculture and allied sectors is 67.35 per cent more. Unlike the previous government, no loan waiver amount was included in the budget allocation. No ‘impractical’ promises like rain guns were made to overcome drought. The budget is grounded in reality,” said Nagi Reddy.

More in next fiscal for interest-free loan scheme: Buggana

drawing criticism from the Opposition TDP for the meagre allocation of Rs 100 crore for interest-free loans to farmers in the budget, Finance Minister Buggana Rajendranath Reddy has clarified that the government would enhance the allocation for the scheme in the next fiscal.

A decision was taken to sanction crop loans to the tune of Rs 87,000 crore at the State-Level Bankers Committee (SLBC) meeting held recently. 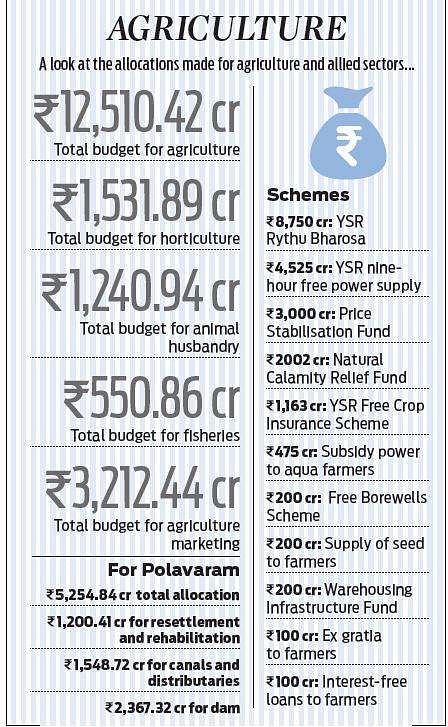