VIJAYAWADA: Chief Minister YS Jagan and Leader of the Opposition N Chandrababu Naidu continued to trade barbs in the Assembly on Thursday, this time over the demolition of Praja Vedika and the controversy surrounding the residence of the former Chief Minister.

While Jagan slammed Naidu for ‘encouraging’ violation of norms despite being in a responsible position, the latter claimed his residence had the requisite permissions. The YSRC leaders, however, appealed to Naidu to vacate the premises immediately. 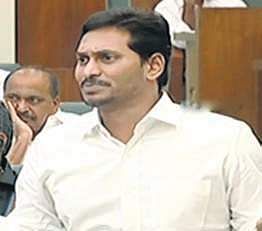 The war of words started during the Question Hour when TDP MLA Nimmala Ramanaidu sought to know the details of illegal structures along river and canal bunds in the State. Municipal Administration and Urban Development Minister Botcha Satyanarayana replied that over 74,000 illegal structures were identified across the State. The discussion then veered towards demolition of Praja Vedika and the residence of Naidu.

Naidu alleged that the YSRC government pulled down the Praja Vedika only because he had asked it to allocate the premises to him.“I wrote a letter asking that it be given to me, the Opposition leader. That was the mistake I made. They razed it down only because I asked them to allocate it to me,” he alleged. He clarified that he would not protest if the government wants to demolish the residence he is living in. “I am just a tenant there. It is not my building. I don’t have any problem to even sleep on the road. But, the government has to follow the same rules for everybody with regard to demolition,” he said.

Taking strong objection to Naidu’s remarks, Jagan made a presentation on the documents related to Praja Vedika and Naidu’s residence, which said the buildings were constructed in violation of norms. “As per the River Conservancy Act, the maximum flood level is 22.60 metres and Praja Vedika and Naidu’s residence stand at 19.6 metres. If the flood course is obstructed with illegal structures, it will have serious ramifications during flooding. We have seen how cities like Mumbai and Chennai flooded. It is a rule to not build any structure along water bodies and a rule is for all,” he clarified.

When Naidu replied that his residence was 130 metres from the river and that Supreme Court has allowed to regularise illegal buildings in possession of the government, Jagan shot back saying, “If the Supreme Court order was there, why did the High Court quash the petition filed by the TDP leaders seeking a stay on Praja Vedika demolition?” He also noted that directions were given to district collectors to take necessary action against the illegal structures in their respective districts.

Naidu appealed to the State government to allay  fears of public that all the illegal structures would be razed down.To this, minister Botcha explained that his government would take decisions based on the economic conditions of the residents.