Farmers yet to transplant saplings, yield likely to drop this year; deficit rain in Karnataka is affecting inflows into Tungabhadra river

KURNOOL: The dip in water level in KC Canal and Srisailam Reservoir Back Canal (SRBC) has hit the cultivation of world-famous Kurnool Sona Masoori rice. Normally, sowing operations commence in the first week of July, transplantation of sapling concludes before July-end and crop harvestation begins in November.

If the water scarcity continues, Kurnool Sona Masoori (BPT 5204) would soon be in short supply, which is the most preferred variety of rice among consumers, mostly in Andhra Pradesh, Telangana, Tamil Nadu, Karnataka and other states, said K Sreeramulu a farmer from Muchhumarri in Nandikotkur mandal. 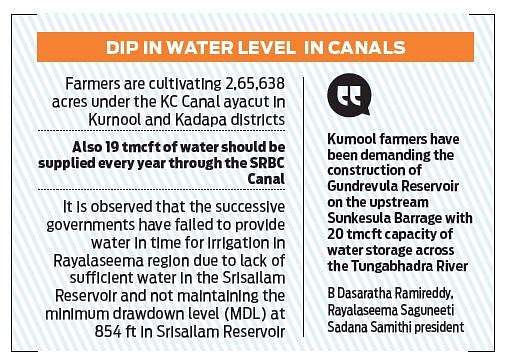 According to sources, the yield in Kharif crop is only 1.5 lakh metric tonnes this year as against 2.54 lakh metric tonnes last year due to water scarcity. Kurnool Sona Masoori rice is being cultivated at Nandyal, Allagadda, Srisailam and Nandikotkur.

A total of 2.65 lakh acres are being cultivated under the KC Canal ayacut and 1.6 lakh acres under the Srisailam Reservoir ayacut.

The rice being produced here is a favourite among many due to its slenderness and taste. It also received a certification from The International Research Centre.

Agriculture Joint Director D Thakur Naik informed that in the last Kharif season, paddy was cultivated in 1.8 lakh hectares in the district. He said there was no decline in Sona Masoori rice production in the past 10 years.He appealed to the farmers to opt for alternative crops.

According to the sources in irrigation department, 24.900 tmc of water should be released (for Kharif and Rabi) every year through the KC Canal from the Sunkesula Reservoir, built across the Tungabhadra River.