VIJAYAWADA: Chief Minister YS Jagan Mohan Reddy on Monday constituted a three-member committee comprising Agriculture Minister K Kanna Babu, MLA Ambati Rambabu and MLC Ummareddy Venkateswarlu to look into the report of the Manjunath Commission on Kapu reservation. The decision comes in the wake of reports of resentment against the State government’s decision to do away with the 5 per cent EWS reservation to Kapus brought in by the previous TDP government.

Following the Centre bringing in a constitutional amendment to provide 10 per cent reservations for Economically Weaker Sections (EWS) in forward castes, the previous TDP government passed two separate Bills in the Assembly, to provide 5 per cent EWS reservation to Kapus and the remaining 5 per cent for other EWS. However, the same was challenged in both Supreme Court and the High Court of Andhra Pradesh.

Two days ago, the Jagan government issued orders overriding the GOs issued by the Naidu government providing EWS reservation to Kapus in educational institutions for the 2019-20 academic year, drawing criticism from the TDP and Kapu leaders.  Taking exception to the criticism, Chief Minister YS Jagan Mohan Reddy said the TDP was trying to use Kapu reservation issue for its selfish politics.

When people’s representatives of YSRCP from the Kapu community met him in his chambers at the State Assembly on Monday, Jagan said his party has never deviated from its stand on Kapu reservation issue. “The stand of YSRC on Kapu reservation has not changed and is in line with what is stated in the manifesto,” he said and immediately formed the committee to look into the report of the Manjunath Commission on Kapu reservation.

Jagan said that the previous Naidu government sent a letter to the Centre in 2017, asking it to classify Kapus as BC community and later wrote another letter, for giving 5 per cent reservation to the Kapus in EWS.

“The Centre wrote a letter to the TDP government on April 4 asking whether the State withdraws its decision of including Kapus in the BC list, but there was no reply.  In fact, EWS reservation of 10 per cent was given on the basis of poverty and not on caste. Despite knowing it, the TDP gave 5 per cent reservation to Kapus on caste basis against the Central government guidelines,” the Chief Minister observed.

Pointing out at the cases in the court challenging the TDP government bifurcating 10 per cent EWS reservation and giving 5 per cent reservation to Kapus and the demand to include Kapus in BC list, the Chief Minister demanded to know why the Naidu government did not implement Kapu reservations in medical and PG seats allocations this year?

“Wouldn’t it be unfair for them to limit it to 5 per cent as the population of Kapus is more than 50 per cent? Who is responsible if the students’ future is at stake?” Jagan asked.

The Chief Minister said his predecessor has killed the hopes of Kapus, who were previously included in BCs, by giving 5 per cent EWS reservation.

Reiterating his commitment to Kapu’s welfare and the promise made to them, the Chief Minister said while the Naidu government spent `1,340 crore for Kapus in last five years, his government has allocated `2,000 crore for the community in the current budget itself. 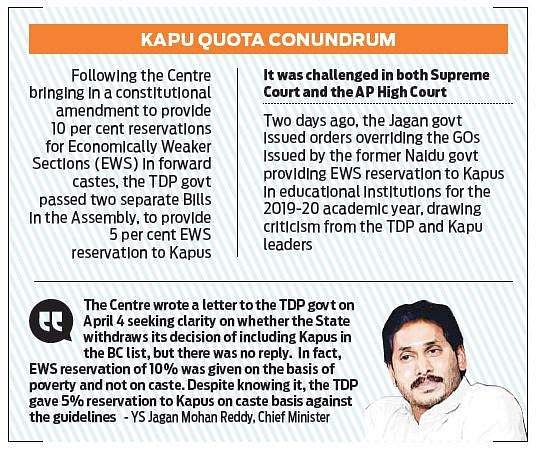 Now we are on Telegram too. Follow us for updates
TAGS
Manjunath Commission report quota to Kapus