VIJAYAWADA:  The stage is set for 46-year-old Yeduguri Sandinti Jagan Mohan Reddy to take over the reins of the State. On Thursday at 12.23 pm, he will be sworn in as the second Chief Minister of the reorganised AP fulfilling the 10-year aspiration of the young leader.

The TDP has decided to skip the event despite the personal invitation Jagan extended to its chief Chandrababu Naidu. The YSRC has also invited BJP, CPI, CPM and Jana Sena leaders for the event. Governor Narasimhan has already arrived in the city, while KCR and Stalin will come Thursday morning. 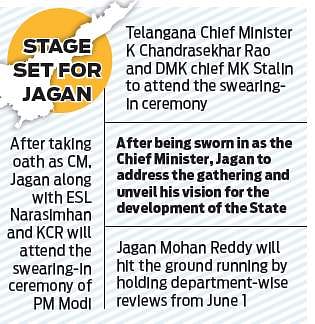 About 30,000 people are expected to attend the swearing-in ceremony at the IGMC Stadium. The Krishna district administration has made elaborate arrangements for the event.

For those who could not enter the stadium, as many as 14 giant LED screens have been arranged across the city to stream the oath-taking ceremony live.

A 5,000-strong police force has been deployed to thwart any untoward incident. The venue has been divided into 18 galleries for the convenience of invitees.

After taking oath as the Chief Minister, Jagan will address the gathering and unveil his vision for the development of the State.

He is expected to announce austerity measures to be taken by the government and other initiatives of the YSRC regime to make the State administration transparent, apart from reiterating his commitment to implementing his Navaratnalu (nine gems) and fight for Special Category Status (SCS) for State.

Later in the day, Jagan along with Narasimhan and KCR will leave for Delhi to attend the swearing-in ceremony of Prime Minister Narendra Modi.

Jagan will hit the ground running by holding department-wise reviews from June 1. He will set his foot in the Secretariat on Friday or Saturday and occupy the Chief Minster’s chamber.

Senior YSRC leader YV Subba Reddy on Wednesday inspected the CM’s chamber on the first floor of Block 1 of Secretariat.

Earlier in the day, Jagan had darshan of Lord Venkateswara at Tirumala. From Tirumala, Jagan went to Kadapa where he offered prayers at Ameen Peer Dargah.

Later, he visited Pulivendula. After offering special prayers at the CSI Church in Pulivendula, Jagan went to Idupulapaya and offered tributes at the memorial of his father YS Rajasekhara Reddy. Jagan had darshan of Goddess Durga atop Indrakeeladri in the evening.

Naidu not to attend ceremony

Telugu Desam Party chief Chandrababu Naidu has decided not to attend the swearing-in ceremony of YS Jagan Mohan Reddy on Thursday. Jagan extended a telephonic invitation to Naidu to attend his swearing-in.

Naidu was elected the Telugu Desam Legislature Party leader at a meeting of TDP legislators held at his residence in Undavalli on Wednesday.

The TDP decided that Naidu should not attend the event but send a delegation of leaders to Jagan’s residence on Thursday morning to hand over a congratulatory message.