Call on Amaravati after all graft out: Andhra Pradesh minister Botcha Satyanarayana

Botcha Satyanarayana said that irregularities found in tenders of trunk infrastructure, layouts to be developed for farmers and other projects.

VIJAYAWADA: Hinting that the State government was examining the option of going for reverse tendering for development of returnable layouts to the farmers and trunk infrastructure projects in Amaravati, Municipal Administration and Urban Development (MAUD) minister Botcha Satyanarayana said costs of several projects proposed in the capital were escalated. Stating that the State government would only take a decision on Amaravati after all the “irregularities” come out, he added that a thorough examination was underway. 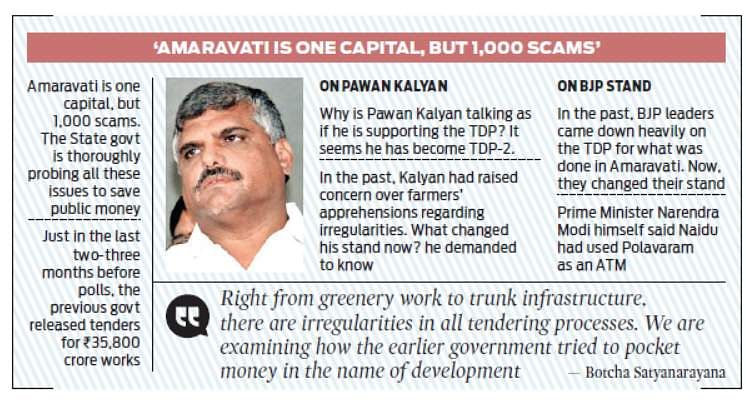 Speaking to reporters at the YSRC office at Tadepalli on Sunday, the minister said irregularities in tenders of trunk infrastructure, layouts to be developed for farmers and other projects were observed.
“Right from greenery work to trunk infrastructure, there are irregularities in all tendering processes. We are examining how the earlier government tried to pocket money in the name of development. Amaravati is one capital, but 1,000 scams. We are thoroughly probing all these issues to save public money,” he said.

Last week,  after the Chief Minister’s review meeting with APCRDA officials, Botcha gave similar reasons and said that the government might go for reverse tendering for HappyNest project.

When quizzed for a clear stand of the YSRC government, he said, “Development of all regions in the State is our commitment. We have our strategies, vision and aim. We will go by that and not work for favouring a community or a party or a person. Just in the last two-three months before polls, the previous government released tenders for Rs 35,800 crore works. Only after all the corrupt practices in these works come out, we will think of what to do with Amaravati.”

Backing his claims of cost escalation in capital projects, he cited the example of how more-than-required scope of works were proposed.

“When we asked the engineers recently as to why the housing project was estimated to cost Rs 630 crore, we were told that a 32-metre-deep foundation was to be laid. Normally, we have foundation 3-5 metres below ground. Going till 32 metres is wastage of public money. Development doesn’t mean favouring contractors,” he remarked.

Later, he countered the remarks made by Jana Sena chief Pawan Kalyan regarding the government’s stand on Amaravati.

“It is understandable if the TDP criticises our decisions as Chandrababu Naidu and Lokesh are the prime culprits in making Amaravati a scam. But, why is Pawan Kalyan talking as if he is supporting the TDP? It seems he has become TDP-2. We are not saying the government can’t be questioned. But, even after seeing what happened in the capital, the actor-turned-politician did not utter a word on corruption. Why this double standard?” he wondered.

He read out the past statements of Pawan Kalyan where the latter raised concern over farmers’ apprehensions regarding irregularities. “What changed his stand now?” Botcha sought to know.

He also slammed the BJP for pointing fingers at the State’s government’s decisions. “In the past, the same party leaders came down heavily on the TDP for what was done in Amaravati. Now, they changed their minds. Similarly, the party is getting angry for terminating the contract with Navayuga Engineering Company Ltd for Polavaram irrigation project. Prime Minister Narendra Modi himself said Naidu used Polavaram as an ATM. Is it wrong if we are trying to save public money to pass the benefits on to the people?” he demanded to know.

“If we have to roll out the promises we made, we have to review all the excess payment deals made by the previous government including renewable Power Purchase Agreements (PPAs). We will fight legally to save public funds. Just because of apprehensions that investments may not come, we can’t give away public money as per one’s whims and fancies. If the government is transparent and committed, investments will flow automatically,” the minister clarified.