Cabinet to clear sand policy, fix price today; people can apply online and sand will be supplied from nearest yard

VIJAYAWADA: The State Cabinet scheduled to meet under the chairmanship of Chief Minister YS Jagan Mohan Reddy on Wednesday is expected to clear the new sand policy to be rolled out from September 5.

The government has already finalised the tenders for mining sand in reaches and transporting the same to the nearby stockyards and issued instructions to the district-level authorities to finalise the contract for transporting sand from stock points to the customer. 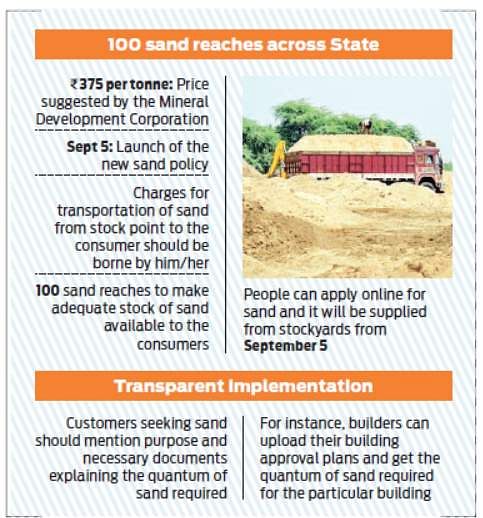 As the government already announced that it will roll out the new sand policy on September 5, the Cabinet will give its nod for the policy and will fix the price for sand. Officials of Mineral Development Corporation have submitted a proposal to the government fixing the sand price at Rs 375 per tonne and the same is expected to be cleared by the Cabinet.

“With only a few days left for announcing the new policy, we have submitted a proposal to the government fixing price of sand at `375 per tonne. As the government is firm that the sand policy should be a win-win situation to both the government and consumers, we have taken all the issues into consideration while fixing the price,’’ an official told Express.

He said the charges for transportation of sand from stock point to the consumer will be in addition to the proposed `375 per tonne.

Maintaining that all the steps are being taken to ensure transparency in the implementation of sand policy at all levels, the official explained that they have also suggested that the customers seeking sand should mention the purpose and necessary documents explaining the quantum of sand required. For instance, the builders can upload their building approval plans and get the quantum of sand required for the particular building, he said adding that all such initiatives being taken to avoid irregularities.

Meanwhile, Panchayat Raj and Rural Development and Mines Minister Peddireddy Ramachandra Reddy informed that the Chief Minister will announce the new sand policy on Thursday.
The minister conducted a video conference with the District Collectors and directed them to take all the measures for the successful implementation of the new sand policy.
He said the government identified over 100 sand reaches.
People can apply online for sand and it would be supplied from the stock yards from September 5, he added.