The district authorities are all set to conduct public awareness campaigns in phases to eliminate the usage of single-use plastic by October 27, or Deepavali festival at all mandal headquarters.

ONGOLE: The district authorities are all set to conduct public awareness campaigns in phases to eliminate the usage of single-use plastic by October 27 or Deepavali festival at all mandal headquarters.

As per the directives were given by District Collector Pola Bhaskar, village volunteers, Asha workers, Anganwadi, ANMs and other Panchayat Raj department staff, as well as NGOs and youth organisations, will play key roles in the campaign.

The initiative was taken up following directives issued by the Centre to implement strict restrictions on plastic usage across all levels. As per the directives, awareness campaign activities should be conducted across the State from Friday (September 13) to October 27. 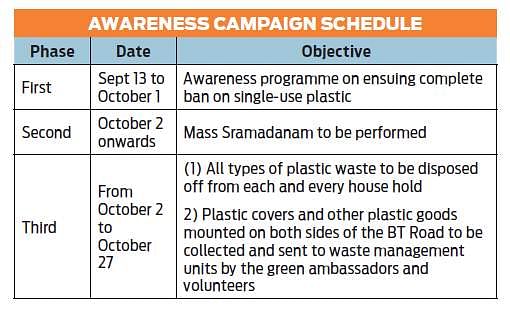 Rallies, seminars and meetings will be conducted at all mandal headquarters as part of the programmes. The newly-appointed village volunteers have been directed to urge the public to download ‘Swachh Survekshan Grameen (SSG) 2019’ application and make sure that at least 15 out of the 50 families under their purview download the same. Using the app, Panchayat secretaries would intimate the feedback sent by the public to their superiors.

After receiving the feedback, the mandal parishad officers would incorporate these to conduct the awareness programme within their village limits efficiently. Later, a comprehensive report will be sent to the district officials. The Gram Panchayat staff will hold meetings on uploading successful stories of people discarding plastic to the ‘SHS-2019’ website.