RAJAMAHENDRAVARAM: Two days after the tragic boat accident in River Godavari, NDRF and SDRF teams, engaged in search and rescue operations, retrieved 20 bodies, taking the official toll to 28, while 27 survived the mishap. The search for another 18 missing persons has been going on.

Till Tuesday evening, 27 of the 28 victims were identified, and the authorities were still trying to ascertain the identity of one person. The retrieved bodies were shifted to Rajamahendravaram hospital for post-mortem and handed over to the families, after completion of formalities.

Seven of the victims were from Visakhapatnam, six from Warangal, three from Hyderabad, two each from Nandyal, Warangal and Tirupati, and one each from Krishna, Nalgonda, Khammam and Ranga Reddy districts. A team of 15 doctors performed the post-mortem, while a team of revenue officials conducted the inquest in a large tent arranged on the premises of the Rajamahendravaram Government General Hospital.

On Sunday, Royal Vasishta, a private tourist boat, set out for Papi Kondalu from Singanapalli near Gandi Pochamma temple in Devipatnam Mandal of East Godavari district. Around 1.45 pm, it tilted sidewards and capsized near Kachuluru village of Devipatnam. Locals, who witnessed the mishap, rushed to-the-spot to rescue those on board.

NDRF personnel had earlier identified that the capsized boat was lying at a depth of 315 feet in the river and suspected that the missing might be stuck inside the boat. High intensity of water flow, depth of the river and whirlpools in the area were making it harder for the officials to recover the wreckage.

DGP D Gautam Sawang on Tuesday inspected the ongoing search operations. He said a detailed report on the incident would be submitted to the government shortly, for taking action against those responsible and initiating steps to prevent such mishaps in the future. Addressing the media, he said steps were being taken to recover the wreckage, but the depth and fast current in the river was hindering their efforts. As soon as the flood-levels decrease, wreckage will be fished out. 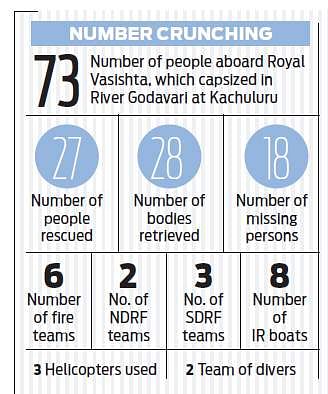 “The sonar equipment being used can only measure up to a depth of 50 metres, while the capsized boat seems to be at a depth of more than 100 metres. We are expecting to procure equipment with latest technology to identify the exact location,” he said.The DGP added cases were registered against the boat operators and that an investigation was underway. Stating that those, who wore life jackets survived, he said the boat operator failed to ensure safety to all. He made it clear that search and rescue operations would continue until the very last person was traced.

Later, he visited the Rajamahendravaram hospital to console the victims’ families and interacted with the survivors. Earlier, he and ministers from Andhra Pradesh and Telangana conducted an aerial survey of the accident spot and took stock of the ongoing rescue and search measures.

Endowment staffer among boat capsize victims
Vijayawada: One of the deceased in the tragic Royal Vasishta boat capsize was an employee of endowments department. Rescue officials on Tuesday, identified the deceased as Raghuram (40), who worked as a Grade-II Executive Officer at Amareswaralayam in Narsapuram of West Godavari district. Endowments Minister Vellampalli Srinivas consoled Raghuram’s wife Nagajyothi, over the telephone after he received information about the employee’s death and assured her of all possible support. He also assured Nagajyothi that a job would be given to her on compassionate grounds