KURNOOL/KADAPA/ANANTAPUR : The famous Mahanandeeswara Swamy temple in Mahanandi mandal of Kurnool district was inundated on Tuesday following heavy rains over the past two days and flash floods in Rallavagu and Palleru Vagu.The compound wall did not help the temple from flood fury.
Heavy rains continued to lash different parts of Kurnool, Kadapa and Anantapur districts for the third day. Six persons were feared drowned in the floodwater.

While three shepherds were reported to have washed away in Vakkileru stream near Allagada, three more persons were feared drowned in a  stream in Proddatur mandal of Kadapa district when an autorickshaw was swept away.  Train services on the Guntur-Guntakal route were affected following submergence of railway tracks at Gajulapalli railway station in Nandyal division.

When pilgrims came to offer prayers at Mahanandi temple, they faced problems approaching the sanctum sanctorum with flood water entering the main temple from the rare side. The water almost entered the sanctum sanctorum, keeping the temple authorities on tenterhooks. They stopped the darshan until the situation returned to normalcy in the evening. The water surrounded the temple and flooded the two tanks (Pushkarinis). 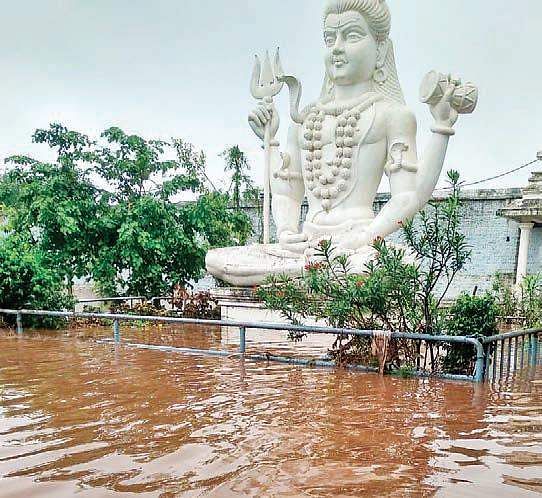 At a time when there was no compound wall, the temple was flooded in 1976. But now, despite the existence of a compound wall, the temple could not escape flood fury. “We managed to have darshan of the presiding deity from 50 feet away from the sanctum sanctorum and later temple authorities stopped darshan,” said K Venkata Seshaiah, a devotee from Bandi Atmakru. Meanwhile, the people of Mahanandi faced a tough situation on Tuesday with most of the roads being flooded and houses resembling scattered islands in a river.

Kurnool Joint Collector P Ravi Subhash and Superintendent of Police K Fakkerappa took stock of the situation. By evening the floodwater started receding in the town. The situation in neighboring Kadapa district was no different. Heavy rains threw normal life out of gear, particularly in the Proddatur division. Both Penna and Kundu rivers were in spate following heavy inflows.

An autorickshaw with three commuters, including a woman and child, on board was washed away in the stream between Kamanuru-Radhanagar of Proddatur mandal. Police and revenue officials took up rescue operations Several villages in Pedamudiyam mandal in Jammalamadugu constituency including Garishaluru, Nemmalladinne Jangalapalle, Kottalapalle, Uppaluru, Guduru, and Chinnamudiyam were paralysed by floods.

The Pedamudiuam police station was in knee-deep floodwater. Vehicular traffic was disrupted as boulders fell on the Chakrayapet-Rayachoti highway. Several villages in Chapadu mandal were also flooded as river Kundu water gushed into residential areas. Officials were on standby to evacuate people from the flood-affected areas. Floodwater flowed over the Hyderabad-Chennai highway at Duvvuru.
The bund of an irrigation tank at Muddanuru breached inundating nearby fields. Jammalamadugu MLA P Sudhir Reddy along with irrigation engineers rushed to the place and inspected the tank.

The MLA directed the officials to take steps to plug the breach immediately.The RTC bus depot in Jammalamadugu looked like a tank with knee-deep water. The RTC garage and bus bay and RTC office were also inundated.  The official said that 50 special revenue staff and expert swimmers were deployed in the Jammalamadugu division to shift the people in low-lying areas to safer places.  The road connectivity to the RTPP was cut off as the flood water of the river Penna  overflowing the road.

With heavy rains lashing several parts of Anantapur district, farmers, who are in distress following drying up of groundnut crop, are celebrating and getting ready to cultivate Bengal gram and other contingency crops. The district received 22.2 mm of rain. The highest 131.2 mm rain was received in Narpala mandal, followed by 104.6 mm in Bathalapalli, 92.4 mm in Singanamala. Chief Minister Jagan Mohan Reddy reviewed the situation arising out of heavy rains and floods in the Rayalaseema region.