Money can be spent in next five years to upgrade teaching hospitals, medical colleges and district hospitals

VIJAYAWADA: The Expert Committee on Health Reforms, which submitted its report to the State government on Wednesday, felt the need for investing Rs 10,000 crore in the next five years to improve facilities and increase capacity in teaching hospitals, medical colleges and district hospitals. The committee made this recommendation after studying the model in Gujarat, where the government pumped Rs 15,000 crore into the BJD Medical College, Ahmedabad since 2015.

The Expert Committee, headed by former IAS officer Dr K Sujatha Rao, visited Gujarat and Tamil Nadu to study the functioning of health sector there and compared the reforms there with those in AP.
“It is shocking to see the near neglect of capital investments in AP Vaidya Vidhana Parishad and Directorate of Medical Education (DME) institutions (in AP),’’ the committee felt while referring to the infrastructure provided in hospitals. The committee observed that in both Gujarat and Tamil Naidu, there is a strong commitment to strengthening public hospitals to reduce medical expenditure burden on the poor by providing free services. 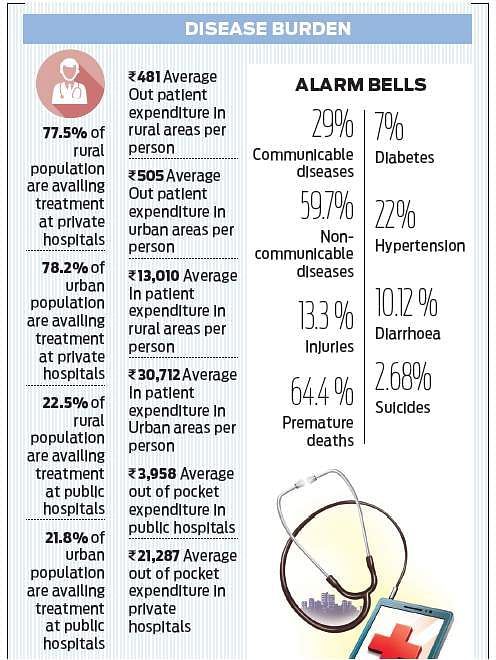 “Evidence clearly shows that market prices are best controlled in a competitive environment when the government is able to provide services free but of equally good quality. What was heartening to see was the pride and sense of ownership with which the government doctors provided leadership to their institutions,’’ the committee observed.

Pointing out to the health sector in the two States, the committee said that in Tamil Nadu, government hospitals have a strong legacy. “In Gujarat, since 2015, nearly 15,000 crore investment was made in BJD Medical College, which includes breaking down old buildings and building new state-of-the-art hospitals with 1000 beds separately for MCH, ophthalmology, neurology and other blocks,’’ the report said and added that AP too should increase such capital investments over the next 5-10 years.

“Through these investments, all the 11 medical colleges should be developed into state-of-the-art facilities with 2000 beds each and, similarly, all AP Vaidya Vidhana Parishad hospitals should be upgraded to 500-bed hospitals,’’ the report suggested.   By investing this amount, hospitals can be equipped with high-end facilities like Cath Labs, MRI’s, CT Scans etc., and State can attract super specialists from across the country.

“As on today, both government hospitals and some in private sector have no capacity to perform high-end procedures and AP is a B-grade State in that sense,’’ it felt. Of 21,610 specialists registered with the AP Medical Council, only 5-7 per cent of them works in the government sector. None of the government colleges has any capacity for oncology and only about three per cent of the specialists have some capabilities for handling heart diseases. For this, the committee recommended the necessity of producing more number of specialists in the government sector to reduce the medical expenditure burden on the people. Specialities in radiotherapy and palliative care should be recruited for treating cancer and chronic diseases, the committee said.

As per the IHME-ICMR Report, the burden of communicable diseases is 29%, non-communicable diseases (NCD) 59.7% and injuries 13.3% in the State as against Kerala’s 13.6%, 74.8% and 11.8% respectively. Also, the State records a high proportion of premature deaths with 64.4 per cent of total deaths. In AP, diarrhoea alone kills five lakh people and accounts for 9% of under five mortality, which is five times higher than that of Kerala.

Deaths due to injuries, hypertension, heart diseases, diabetes, cancer and chronic obstructive respiratory disease (COPD) are dominant, especially in the coastal districts of East Godavari, West Godavari, Krishna and Guntur. The members of the committee highlighted that a large number of people are impoverished due to health issues. As many as 10 lakh families who are a little above the poverty line are falling under below poverty line due to health expenditures.

The out-of-pocket expenditure on health is around 15,711 crore out of which an estimated 8,000 crore alone was spent on medicines in the State. It was recommended to the government for providing common medicines at free of cost and high-cost ones at reduced prices so that the burden on people can be reduced. The committee further highlighted the need to fill the vacant posts of specialists, doctors, paramedic etc in all hospitals including Community Health Centres (CHC), Area Hospitals, district hospitals and teaching hospitals across the State. According to the committee observations, there are 1005 posts of specialist cadre, 555 posts of General Medical officers in CHC, 1840  posts of nurses, 1239 posts of paramedics and 2793 posts of support staff vacant.