Though several States started imposing hefty penalties for violations from September 1, the transport department has adopted a wait and watch policy over the issue.

VIJAYAWADA: The committee constituted to look into the revision of fines for traffic violations under the Motor Vehicles (Amendment) Act-2019 has suggested that the State government may reduce the proposed penalties by 50 per cent.

Though several States started imposing hefty penalties for violations from September 1, the transport department has adopted a wait and watch policy over the issue.

Almost a week ago, transport commissioner PSR Anjaneyulu had submitted a report on the revised penalties, drafted by the committee, to Transport Minister Perni Venkataramaiah and Chief Minister YS Jagan Mohan Reddy.

Prior to imposing fines, the department has decided to sensitise the public about road safety norms.
A senior official, on the condition of anonymity, told TNIE that a report drafted by the committee over reduction of fines was submitted to the government last week, on September 17.

However, the chief minister was unable to review it as he was busy in dealing with the boat mishap near Papikondalu and floods in Rayalaseema region.

“We hope that a decision may be taken over the suggestions made by the committee in the next couple of days. Then a notification will be issued,” he added. 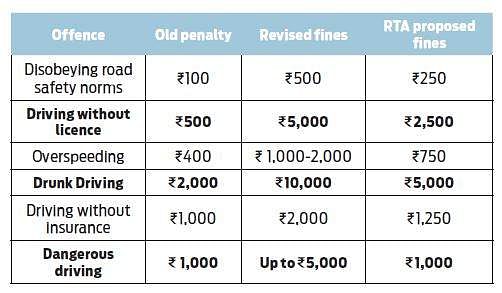