Rivers and streams in the district were flowing dangerously resulting in normal life being thrown out of gear in several low-lying areas.

ANANTAPUR: Incessant rains in the drought-prone Anantapur district for the last two days have claimed the life of a seven-year-old girl and caused extensive damage to several houses. 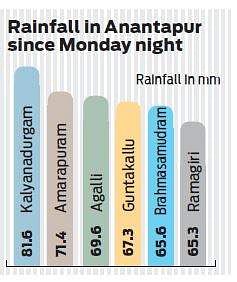 The girl, identified as Vaishnavi, a Class II student at Venkatampalle of Peddavadaguru Mandal, died when the roof of the house collapsed on Tuesday morning. Her body was shifted to Gooty Government Hospital for post-mortem.

Rivers and streams in the district were flowing dangerously resulting in normal life being thrown out of gear in several low-lying areas.

In a pleasant surprise, waterfalls, like the one at Konauppalapadu in Yadiki mandal, which remained dry for long, came to life. In Lakshmampalle of Yadiki mandal, a tractor and some motorcycles were washed away, while low-lying areas in several colonies in Yadiki were inundated following breach to the Pinnepalle tank.

The breach to Hullkallu tank in Kalyanadurgam left several colonies flooded and the house of one Noorjahan was washed away. Her family broke down seeing their household articles scattered away in nearby colonies and, in a heartrending sight, they were seen running frantically to salvage them. Another house is also reported to have suffered total damage. 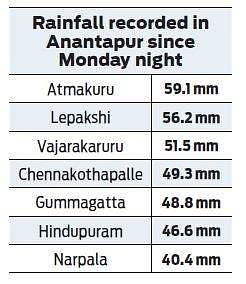 A large python got washed into Kota street of Gooty town, creating panic among residents. The colony residents alerted forest department staff, who rushed to the spot and took away the reptile. It was later released into the nearby forest.

With Donekallu stream in Vidapanakallu mandal flowing dangerously over NH 63, vehicular traffic on Bellary and Guntakal route was paralysed for some time.

It was reported that at several places, check dams were washed way and standing crops, particularly tomato, chili, and vegetables suffered extensive damage. Chitravati, Hagari, Vedavati and Penna are flowing full and several medium and minor irrigation tanks across the district are now brimming with water.

Uppavanka and Pedda Vanka streams in the district, which have remained dry for the last 15 years, are once again brimming with water.