The total payment towards the two instalments and the interest worked out to Rs 7,959.12 crore.

VIJAYAWADA: The State government on Wednesday cancelled the GO 38 pertaining to the payment of fourth and fifth instalments under the Agriculture Debt-redemption (farm loan waiver) Scheme-2014 along with interest for three years, issued by the previous TDP government the day the election schedule was announced on March 10. The total payment towards the two instalments and the interest worked out to Rs 7,959.12 crore. Explaining the rationale behind cancelling the GO, Agriculture Minister K Kanna Babu said the YSRC government has unveiled its own scheme for the benefit of farmers. The erstwhile TDP government issued the GO only to deceive farmers and make political gains, he said. “The TDP, which promised farm loan waiver before 2014 elections, had brought down the total farm loan waiver to Rs 24,000 crore from Rs 87,000 crore. In five years of its rule, the TDP government had paid only Rs 15,279.42 crore,’’ the minister observed. “The TDP government delayed payment of fourth and fifth instalments and finally, it issued the GO just before election. The TDP regime also failed to make adequate financial provision for clearing loan waiver instalments in the Vote-On Account Budget,’’ he said.

On March 10 this year, the TDP government issued the GO according permission to release the fourth and fifth installments with interest for three years at 10 percent per annum.Farm loan waiver was the  promise of the TDP before the 2014 elections. After coming to power in 2014 elections, the TDP had put Rs  1.5 lakh cap on loan waiver in five installments.

Accordingly, it cleared three installments of those who had loans above Rs 50,000 and, at one go the loans of those who owed less than Rs 50,000. However, the previous government did not clear the remaining two installments and issued the order for releasing Rs 7,959.12 crore, including Rs 3979.56 crore each required for the fourth and fifth installments along with 10 per cent interest.

What YSRC govt doing for farmers
Rythu Bharosa (to be launched on Oct 15) - Family of each farmer to get `12,500 a year
Free crop insurance (govt will pay farmers’ premium contribution)
Interest subsidy on crop loans advanced to farmers
Subsidy on supply of seeds, fertilisers and micro-nutrients 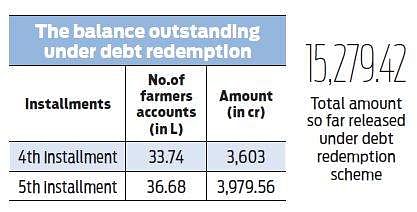