Tests will be ramped up to 17,500 per day within next 10 days, officials tell Chief Minister

VIJAYAWADA: Intensifying the number of COVID-19 tests, the health department officials conducted a record 5,508 tests on Saturday. By ramping up the tests to more than 5,000 per day, Andhra Pradesh now stands at second position among other States in the country to conduct maximum number of COVID tests per 10 lakh population, officials said.

At a review meeting with Chief Minister YS Jagan Mohan Reddy on Sunday, officials said even without using the available rapid test kits, they could increase the number of tests to more than 5,000 per day.
“The number of tests will increase further in the next three-four days. The tests will surge up to 17,500 per day in the next 10 days,’’ officials told the Chief Minister.

Officials told the Chief Minister that the rapid test kits will be put to use in the next couple of days.
“Rapid tests will be done in red zones and also on those who are identified through household survey,’’ officials said. Jagan said by conducting tests on the 32,000 people identified through household survey, they can come to a conclusion on the extent of the virus spread. The Chief Minister asked the officials to bring frontline workers such as Asha workers, volunteers, village and ward secretariat employees, sanitation employees and police under the purview of Corona Bhima to boost their confidence. 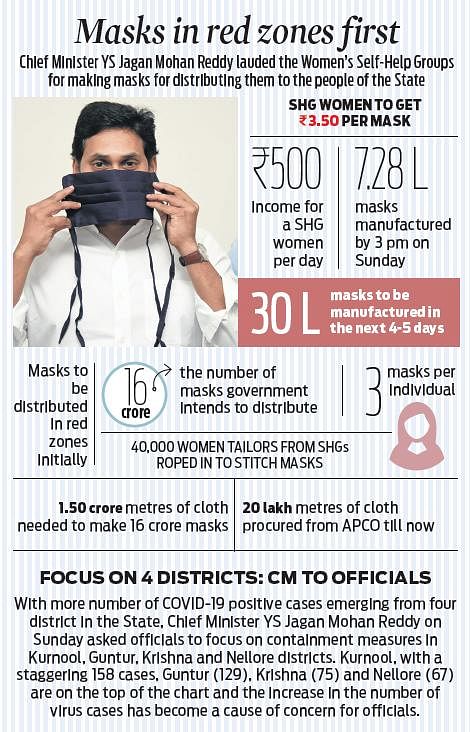 Lauding the services of all those who were involved in the fight against coronavirus, Jagan said special care should be taken in maintaining health and hygiene in the hospitals for which a special drive should be taken up once in every two to three days. Chief Secretary Neelam Sahney, DSP Gautam Sawang and medical and health special chief secretary Jawahar Reddy were among those present on the occasion.

With more number of COVID-19 positive cases emerging from four district in the State, Chief Minister YS Jagan Mohan Reddy on Sunday asked officials to focus on containment measures in Kurnool, Guntur, Krishna and Nellore districts. Kurnool, with a staggering 158 cases, Guntur (129), Krishna (75) and Nellore (67) are on the top of the chart and the increase in the number of virus cases has become a cause of concern for officials.