Our government is extending all financial benefits to women as we are sure they will make proper use of the money for the upliftment of  their families,” the Chief Minister asserted.

VIJAYAWADA: Chief Minister YS Jagan Mohan Reddy on Friday launched the YSR Zero Interest Loan scheme, under which Rs 1,400 crore has been credited to the bank accounts of 8.78 lakh Self Help Groups (SHGs). Under the scheme, women SHG members can avail loans of Rs 20,000-40,000 a year. It will benefit over 91 lakh women SHG members across the State. Of the 8.78 lakh SHGs, 6.95 are in rural areas. 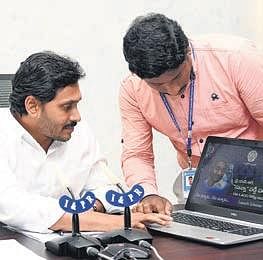 Speaking on the occasion, Jagan said his government was prioritising the welfare and development of women, and highlighted various schemes the government has introduced for the same. “In spite of the precarious financial condition in the wake of the coronavirus outbreak, we came up with a scheme to benefit women.

Our government is extending all financial benefits to women as we are sure they will make proper use of the money for the upliftment of  their families,” the Chief Minister asserted. Stating that his father and former chief minister YS Rajasekhara Reddy introduced Pavala Vaddi (interest at 25 paise) scheme when the interest on SHG loans was about Rs 1, he said that later, the scheme was modified to offer interest-free loans and was stalled in 2016 by the previous government. “Today, our government has come up with this scheme for the benefit of women, and I would like to thank god and the women for giving me this opportunity,” the Chief Minister said on Friday.