Urban Development minister Botcha Satyanarayana said that that all infrastructure developed would be utilised without the question of any wastage of public money.

VIJAYAWADA: With the decks getting cleared for relocation of executive capital to Visakhapatnam, the issue of how the State government would use the existing infrastructure for which about Rs 9,000 crore has been spent in the past five years still remains a question.

While clarity on which stalled projects would be resumed and how they would be used is yet to be given by the government, Municipal Administration and Urban Development Minister Botcha Satyanarayana told TNIE that all infrastructure developed would be utilised without the question of any wastage of public money. 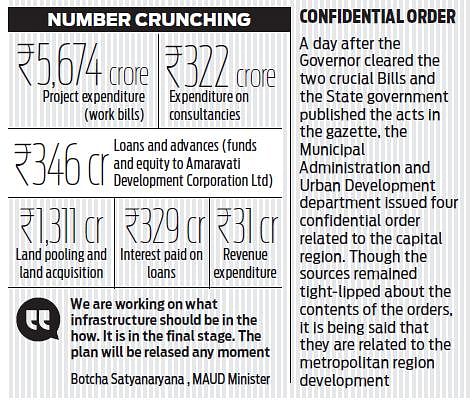 When asked about the concerns over probable wastage of public money, around Rs 9,000 crore, spent on the projects, Botcha clarified, "Only about Rs 5,700 crore has been actually spent, and pending bills are worth another Rs 3,000 crore. There will be no question of wastage of a single penny of public money. The government is committed to develop Amaravati and keep the promises made to the farmers. This is the Chief Minister’s order," the minister said.

So, will the works resume in a month’s time? "It won’t take even that much time. The Amaravati Metropolitan Region Development Authority (AMRDA) will soon be in place and the works can resume any moment. People will see it," he added. Earlier last month, the minister had announced that the works would resume in Sravana Masam.

Sources said that the development works in Visakhapatnam, which will be the executive capital, will be taken up only after the works in Amaravati would resume. "The projects are being classified based on priority. So, the development will be done in phases," an official noted.

For the record, structures such as the interim government complex (Secretariat) in Velagapudi, Judicial Complex in Nelapadu, Seed Access Road are already being used. Will Secretariat also be used after the relocation of executive setup is concluded? The officials were affirmative.